Normally when I get a watch I’m not too particular about its ability to keep perfect time. If it does, great! But if it’s off by a few seconds it’s not a big deal for me. However, my most recent watch, an HYT H20, would gain over a minute an hour making it necessary to perpetually readjust the time. That was a horological sin that I couldn’t’ overlook…

When a watch runs fast the most likely culprit is magnetization. I’ll skip the mechanics, but there are plenty of great articles online that explain why. In my “Ode to Crap” report (private post) I mentioned that I got a demagnetizer. I’ll pop it below for reference. 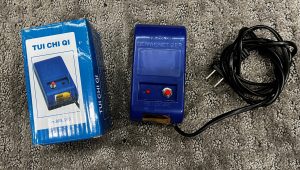 If you believe your watch is magnetized you can use a smartphone app called “Lepsi” to help sort things out. This little blue box (about $15) can be bought on Amazon and will demagnetize almost any watch.

Short version: The HYT was not magnetized which meant there was another problem. I don’t know a ton about watches but I felt like I knew enough to see that there were no obvious issues (i.e. a tangled hairspring) so I decided real science would be required. I got a copy of TimeGrapher, another excellent smartphone app that measures beat frequency and consistency. 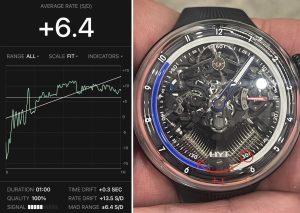 Be sure to click on the image if you’re curious to see the numbers more clearly. We ran the test for one hour and, by all accounts, the watch is fairly accurate with a projected gain of 6.4 seconds / day. Not a big deal. However, immediately following the testing the minute hand was too far advanced. How could that be? As it turns out there is a point near the base of the watch where the minute hand has to make a jump across the liquid tubes. When it jumps it actually gains about a second and so it quickly begins to show the wrong time. Unfortunately this is a mechanical issue that will require the watch to go back to HYT.

Below is a timelapse of two watches next to each other running for a couple of hours. Can you see where the divergence happens? Pretty interesting!

The HYT H20 is a watch I will absolutely miss while it’s off being recalibrated (frankly, I have a hard time understanding why it left the factory after the custom work I requested without careful time calibration checks). Hopefully they can get it in tip top time telling shape quickly…