Yesterday Chevrolet revealed the all new 2014 C7 Corvette Stingray. I think the car looks better than the leaked drawings, but there’s still something I don’t like about the back. The front and profile look really good to me and the interior seems like an upgrade too. My son said it looked like a Ferrari California mixed with a Camaro, but he liked it. My wife said she thought it looked beautiful but she missed the circular tail lights (I agree). Perhaps the design will grow on me a bit more with time. I’m the first to admit I’m not big on change (in general) and I see this redesign as a move away from American Muscle more toward Italian Style. I will be curious to see the car in person and read/watch performance reviews. And, for the record, I’m going to miss the LS series engines. 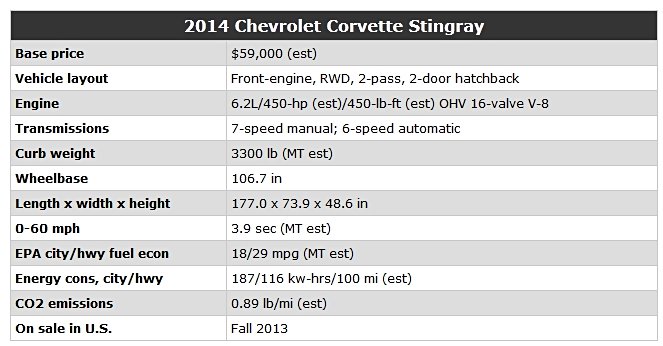 It’s interesting to me – from looking over various forums and video comments – how polarizing this design seems to be. Many people seem to like it and others seem to hate it (I lean more toward liking it, if I have to pick a side). I can’t personally recall the reactions when the C6 was unveiled, but people have indicated it was much the same. In a way I understand what GM is doing- they want to cater to the groups that love Ferraris, Lamborghinis and reel in a younger generation of car buyer. It’s probably time to shake the “old man” image. And no, I am not an old man 😉