The Quest for 1000rwhp continues. Each day brings our tireless hero one step closer to his goal…

I finally got my car back from Premier. Most of the issues have been resolved: Melting wires are repaired and relocated (with fire sleeves added), new knock sensors, new MSD spark plug wires and spark plugs. The turbo inlet hose issue was fixed. Premier also put in my new fuel injectors- Injector Dynamics ID1000s. But most importantly the dyno and street tuning is finally finished. Here’s where we’re at: 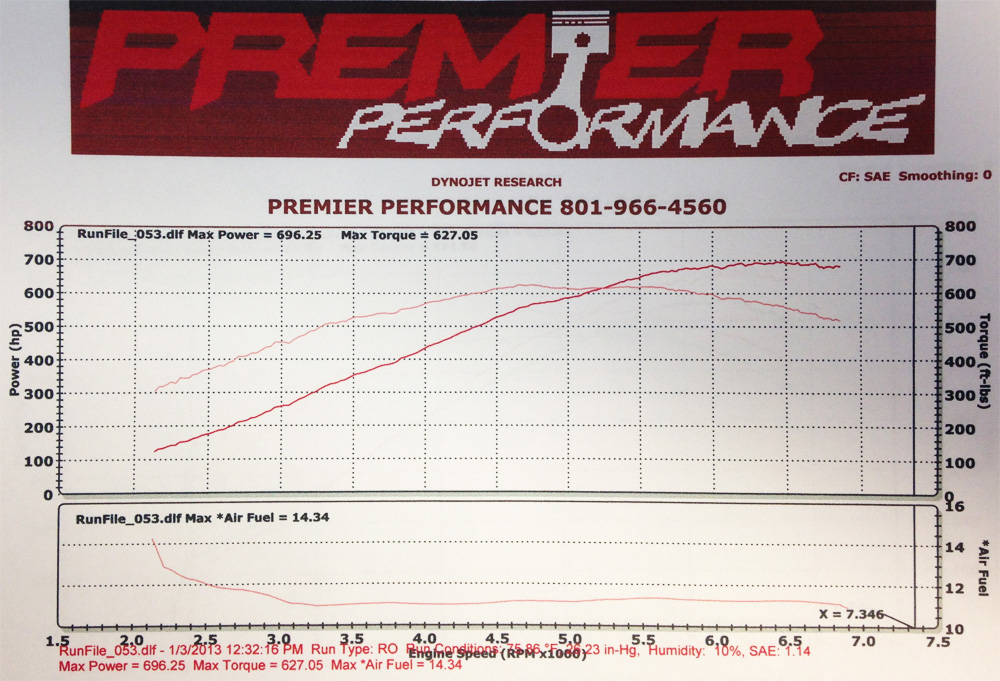 Not too shabby. 696rwhp and 627 ft/lbs or torque is about what I expected. For the most part the dyno graph looks great and the A/F ratios are where I want them.

If you compare it to the original dyno I did at Premier (below, both runs overlayed) I lost some power on the low end. It could be the lower compression of the new engine (9.8:1 vs. 11:1 on the LS7). It might also be that the test was started later, A/F ratio differences (I don’t know what the A/F ratio was on the first run), or something else. I’m a little surprised to lose that much torque, but it’s not too big a deal. In fact, it may actually beneficial when facing traction issues.

The top end power with the new mods and tune is more substantial. I gained about 50 rwhp and 50 ft/lb torque. The last dyno was 8 pounds of boost (maybe) and this is just 6 pounds so overall I’m pleased with the results. 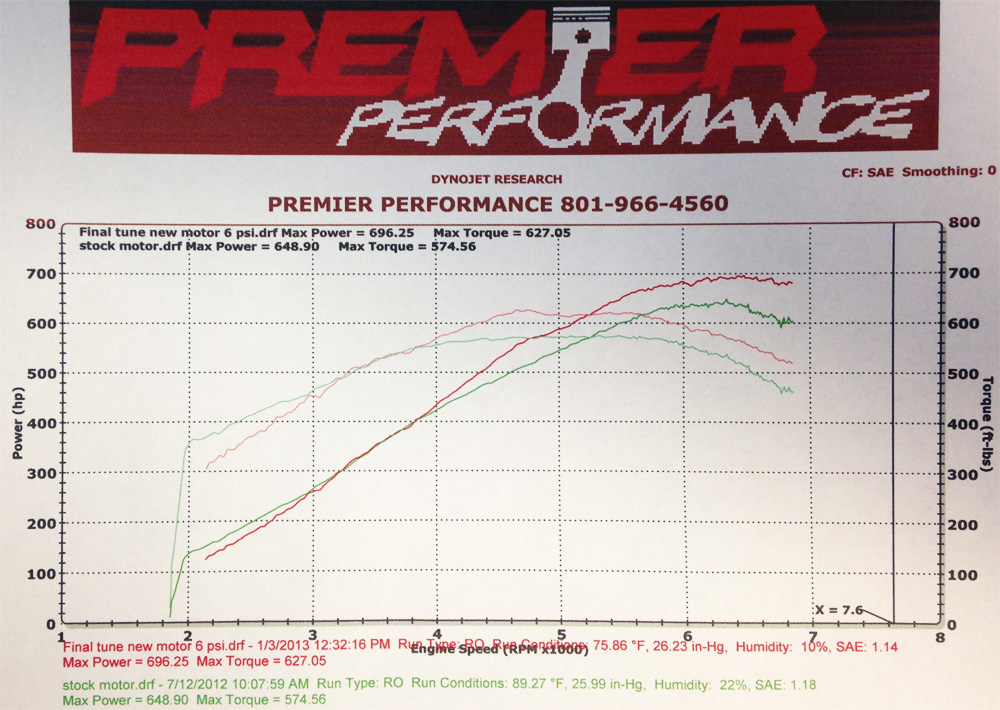 I’ve only had the chance to drive the car twice, but both times it was awesome. It pulls hard and it’s super smooth (no surging or hiccups). I really like the idle too- not too rough and plenty loud. I wish I could do some more testing with the car, but I’ll have to wait for nicer weather. Initial impressions: Excellent.

Some people might say it’s taken eight months to get back where I started. What do I mean? Well, take a look at this graph from my old setup done at another shop:

It appears that back then I had 693 rwhp and even more torque than I have now. The car ran well and it was a blast to drive. In essence, everything I have now I had then. So why did I do all this? Let me tell you.

1) I don’t trust this 693 rwhp dyno graph. Track times were way to slow for that kind of power and that same tune gave me 648 rwhp at Premier. I don’t think my car has ever really had as much power as it has now. 2) Before these new mods my car was a time bomb; You can’t run boost a stock LS7 forever. There was nowhere to go because everything on the car – engine, trans, clutch, diff, – was maxed out in terms of it’s ability to handle power. 3) The new setup makes more power on 6 pounds of boost than the old car made on 8 pounds. And now everything is now built to handle the power so there’s nowhere to go but up. 4) My end goal is to have a 1000rwhp car (I might settle for crank horsepower) and this is how I’m going to get there.

So that’s the progress for now. In a few months I’ll head back to Premier, we’ll crank up the boost and see what happens.