Wow. January 2009. I completely missed November and December of 2008. I have my reasons though. In November I was busy combating a “failing economy”. In December we were so inundated with business that I could barley breathe and I spent a lot of time wondering why I was so worried in November.

The BladeHQ 2008 Report: Our 2008 December sales were up 40% over 2007 and overall sales for 2008 were up 32% over 2007. The amount per order dropped a bit but our order volume surged and the post Christmas sales have been promising. While the preliminary data has been encouraging I don’t feel like we’re out of the woods by any means. I’ll be curious to see how January pans out for us. I’m cautiously optimistic.

The Hughes Family 2008 Report: We made it through 2008 and all of us are still alive. Quite an accomplishment, really. December is always hard on Fran becuase I’m at work so much and this year has been particularly difficult becuase of sickness (everyone over here has been sick at some point in December). The kids are doing good. Gabe (18 months) walks now and says a few words.  Claire (3)  is still a little fire ball and full of mischief. She’ll start going to preschool next year.  Mike (5) begins kindergarten this year and he’s very excited. He seems well adjusted with a hint of crazy.  For more on the Hughes family check our Fran’s blog (click here).

The Cam Report: December has not been kind health-wise. I think I’ve gotten everything a guy can get. Bronchitis usually hits in mid December (it recurs each year). This year the flu hit on top of that, coupled with what I believe to be Salmonella poisoning. At some point during the “recovery” I acquired the common cold, strep throat and an ear infection (all of which I am still dealing with). I can’t recall every being sick for this long- it will be 3 weeks tomorrow. I may just have to go see a doctor. Not a really a fan. If only Dave was finished with Medical school… he could hook with up with some meds!

Nothing too noteworthy happened in November. Well, to be fair I’m sure there were a few things of interest but I was too consumed with the failing economy to notice. December was so incredibly busy I’m glad that it’s over. My New Year’s Resolution is to work less and enjoy life a little more (shouldn’t be hard since there was virtually zero enjoyment in December). Christmas day was alright, except for the fact that I was miserably sick. Santa brought some fun stuff though!

We got Mike Leapster 2 video game system. I wanted to get him a GameBoy Advance, but Fran was adamant that Mike learn something while he played video games. The Leapster 2 is a nicely built system, and the games seem like a lot of fun. I’m impressed by the thought Leap Frog put into the design. The only drawback the I saw was the low quality screen- I would have been willing to pay a little more to get crisper resolution and a faster refresh rate, especially given how vivid and colorful the graphics in the games are.

Back in September we Gave Claire a Kidcraft dollhouse. The thing is huge (so huge it’s subsequently been discontinued and a new smaller version is available). It’s designed for 12″ dolls and has three floors and 10 rooms where the dolls can live. We cleverly kept the furniture that came with the dollhouse stashed until Christmas and are dishing it out in small doses. We also got her some new dolls and she’s nearly ready to play with everything correctly.

Gabe is only 18 months so he got some Duplo sized Megablocks and a few books. He seemed happy. Besides, Grampa and Grandma spoiled the little guy silly! Our kids are very lucky to have such generous grandparents.

I tried to get Fran an iphone, but she’s (wisely) decided to wait until July. For our wedding anniversary we’ll get iphones together (July is when my current contract with Sprint expires). Looking forward to that. Maybe they’ll release a new model and the wait will be worth it. Maybe. Fran also got an all expense paid trip to Reunion Island! Lucky girl.

Fran gave me CSI season 8 (just about finished- one perk to being stuck in bed) and Santa brought me a new Yamaha Keyboard. Maybe it’s tacky to post the Christmas haul on here, but come on- everyone wants to know what everyone else got. Don’t pretend you don’t!

The new keyboard is the Yamaha Motif XS8 workstation. Yamaha makes the XS in an 88, 76 or 61 key configuration. Anyone who has any serious interest in a workstation like this should get the 88 key version- no regrets. Plus the 88 key version features weighted keys for a feel that more closely resembles a real piano. I’ve had numerous Yamaha Keyboards over the years. Below you can see my keyboard evolution. The first is the Yamaha P120S which is exceptional. I actually wrote a review for it (you’ll have to search a bit).  Next I had the Yamaha Motif ES. I never really clicked with the ES. I found the sequencer nearly impossible to use and the manual appeared to have been written by super intelligent extraterrestrials with no regard for the limitations of the human mind. Now I have the Yamaha Motif XS and I’m thrilled. Yamaha added a much larger color screen which makes navigation, editing and everything else much easier. The sequencer is very simple to use and the manual seems much more straightforward. This is the keyboard/workstation that I’ve been waiting for. Yippe! Now if only I could play the piano… 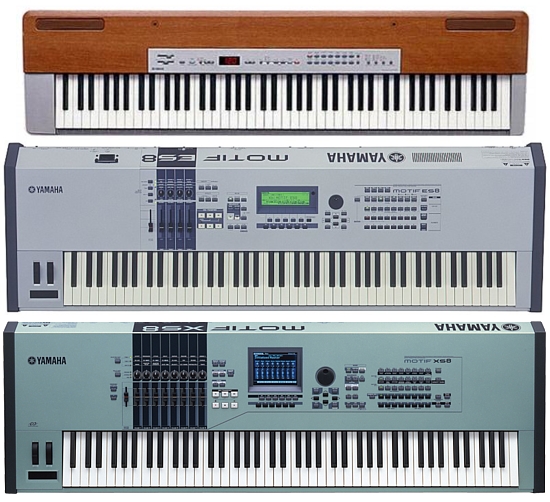 And in other news I have finally found watch love. I’ve spent a long time looking for a watch that has the functionality I want, suits my style, and is wearable in a practical way- enter the Tissot T-Touch Expert. I actually owned the prior version (just the standard T-touch) but I made the mistake of getting the polished casing. That, coupled with the fact that the watch was a little small, made it a bad choice. The Expert has a much larger case and it suits me better (I’m a big guy and I like a big watch). Plus the casing is brushed titanium which is light enough to not bother me and ha sa nice low key look. The dial is carbon fiber which I like. And the Expert has a backlight, which is an added bonus. All in all a great watch and one I can recommend to anyone. If Tissot comes out with a solar version is may very well be the perfect watch.

For some reason (ha ha) Mike became obsessed with the idea of having a watch too. We found a reasonably good model for him at Walmart. Watch technology has come a long way- when I was a kid I saved up for a watch just like his and it cost me nearly $50 (and that was in 1987!). For $10 we found a water resistant digital watch with a backlight, chronograph, date/day display, alarm and a nylon strap with Velcro. Teaching Mike to read time has been tricky, but I think he’ll get it soon. Ah, the joys of mini me.

Well, that’s about it for now. I’m glad to have 2008 over and done with. Looking back it was a challenging year in many ways and I’m looking forward to being a little wiser and little more careful in 2009. No regrets this year- that’s my goal. I know it’s impossible, but it will be a good guiding light on my quest to better myself and contribute meaningfully to my family. Hopefully I’ll have more time to blog this year. Cam on Commerce needs some love!

1 thought on “Where Does the Time Go?”