When I embarked on my Corvette adventure I really had no idea what I was getting into. I’ve touched on this before and even asked the question “Would I do it again?” The human capacity for hope is incredible. I keep waiting for a positive outcome and, despite numerous setbacks and disappointments, I still believe that success is just around the corner. I write this post mostly to put my thoughts in order. And, in general, I think I’d like to blog in a more balanced way- include both the wins and losses, so to speak. A blog filled with only the good is simply a fantasy and provides no real value to a reader (unless the reader is just the author).

The initial engine and drivetrain installation took much longer than I expected. I was okay with that, because there was periodic progress. The first round of tuning and tweaking also took longer that I wanted and I got the car back after three months in mostly drivable condition. But after the injector blew out things just haven’t been the same (there are blog posts on events up to this point if you happen to be interested) …

Premier has now had my car about four months and I just can’t figure out what the hold-up is. On the one hand, it’s not a big deal- I don’t really have a place to put the car right now. And I want the work done right, not quickly. On the other hand from a customer service point of view this is not the right way to handle a job. I have been assured over and over that it’s nearly done, it’s their top priority, etc. but they just don’t make any headway.

I know there are issues that have popped up, but the resolution speed is, to put it nicely, slow. When there was an issue with the methanol kit I felt like I literally had handle it myself and after weeks of “I’ll get to it” I dragged my own mechanic up to resolve the problems. I like the guys at Premier, I really do. But if they have so much business they need four months to work on a car then maybe they need to tweak their business model.

For the final tune they are planning to have the car reflashed back to stock and start the tuning process over again (gotta start fresh!). But, I had thought this was the plan months ago. So to be at this point now is frustrating. And I hope that this strategy doesn’t result in another month of dealy. When I get my car back in great working order all will be well. But if they keep up this pace I might go mad before then…

I thought I would be embarking on a fun new adventure with this car. And I guess I am- just not quite the way I expected :).  After getting the car back from EVOMS there were still issues with the idle and the tachometer would hang when rolling in neutral. I should have paid more attention to those things from the get-go, but I was obsessed with another issue- emissions. Despite assurances that the car would be OBDII compliant the onboard emissions diagnostic tests wouldn’t initially run.

To their credit EVOMS did update my tune with missing OBDII components and was very responsive to my issues. However, the car was still unable to run it’s tests and when the engine light came on that’s when I really started realizing there was something else going on. It’s disappointing to get your car back “ready to go!” and have problems. I tried to troubleshoot some things on my own (even spending an entire day pulling out engine parts) but didn’t have any luck. I needed some expert help!

I took it to a company in Tooele called RaceCo. My initial impressions of them are excellent. Thus far they have found a hole in one of the intercoolers. It’s large enough that they can’t even do any other testing until it’s fixed. Unfortunately they are not able to weld it so it’s going to be new intercoolers for me. 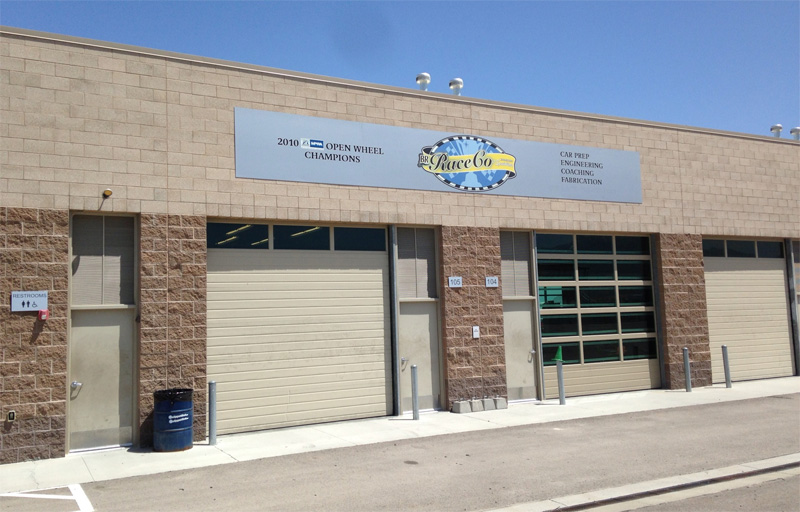 And, after more research, I have determined that my Sport Button is not functioning correctly. That coupled with intercooler hole means that I may not have even been experiencing the car’s full potential. I wish EVOMS’s inspection had caught these issues and they could have been handled then and there. But at least I found a competent local shop and we’re getting to the bottom of it.

Update (July 12, 2013): Turns out the sport mode doesn’t work because of the aftermarket head unit (stereo). The car still makes full boost in normal mode so no complaints from me. Also, RaceCo was able to locate a couple more leaks – things that vent internally so I’ve got my fingers crossed.

I had been planning to sell this car, but it’s become my daily driver now (you know, since my other cars are kaput). Unfortunately it’s also become the victim of my carelessness. I rammed the front side of the car into a shelf in my garage and it’s sustained a bit of body damage. Oops! I need to send to a body shop… I’ll bet I could just do it myself though (update: I did do it myself). 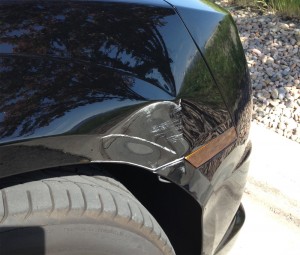 I try to keep things in perspective. I’m sensitive to the fact that these “problems” are not life threatening and pale in comparison to to what many others face. But in the end, even though I’ve brought it upon myself, they do cause me some distress. I’m learning to work through the annoyed feeling feelings and I think I can still manage to enjoy my hobby even when nothing is working quite right. 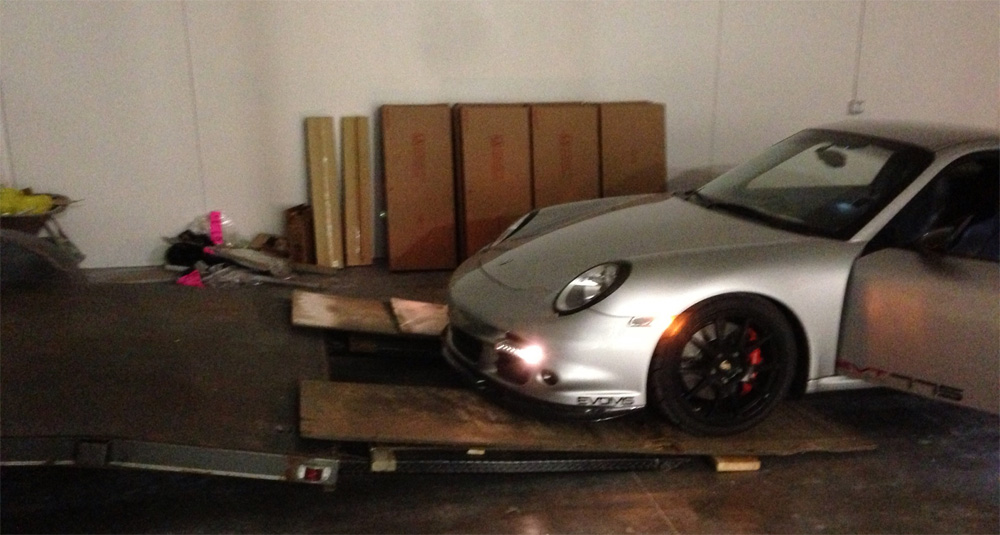 One for the road: Pulled off part of the front spoiler why trying to load the car onto a trailer. Whoops! Easy fix, but the kicker was that we couldn’t ever get it on the trailer. I had to limp it down to RaceCo. This is the fun stuff I live for 🙂