Ah… the gaps in my blogging are getting bigger and bigger. Each time I commit to writing bits of the blog posts as I go. But I never seem to have the time (or maybe it’s just a memory issue… I forget). I may slow things down even more with the holidays approaching. I know I say it every year, but this time I might mean it. 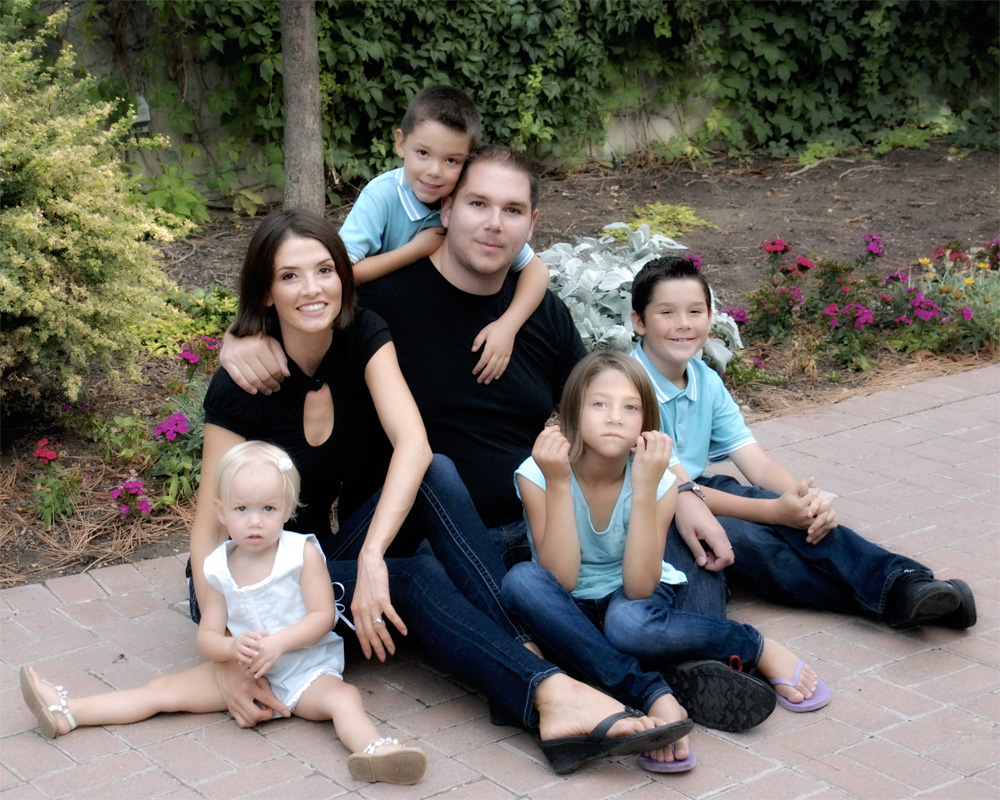 We went and got family pictures taken a couple of weeks ago. We’re still trying to figure out where this blond kid came from…

Here’s a shot of my offspring. There’s no prouder dad anywhere than me.

Claire had her 8th birthday this month! She invited some friends over and the they went to In ‘n Out (assisted by my lovely wife and I) and then…

… back to the house for cake and a party. I don’t have pictures but after the party Fran took them down to the Provo Beach Resort for a ropes course adventure.

After driving around our work truck for awhile it became apparent that I would need something a little larger. I decided to get another Tacoma (there will be a separate post about this… someday). I think I’ll name him Truxton.

Recently the kids had their annual school fair. Because the weather looked bad they had it inside the school. Apparently it was crowded, claustrophobic and loud. One of the moms said “I hope my kids love it as much as I hate it.” The kids did have a good time romping around, getting their faces painted and winning prizes. Chloe got a cute face flower too.

Usually for our dates we go to eat and see a movie. The past few weeks there hasn’t been anything we wanted to see so we’ve been organizing our warehouse, our garage and trying to get “important” stuff accomplished. On one of our dates we decided to try the Blue Lemon (Fran had eaten there once before). We both got fettuccine alfredo and honestly is was maybe a 4/10- just super bland. The soups we got were actually really good but I don’t know if we’ll give it another try.

I recently mentioned my ticket I got for having no insurance. Our insurance company wrote a letter explaining what had happened. Although overly beaurocratic, in my opinion,  Lehi city was nice enough to dismiss the charges against me.

And some very sad news:

1981 ~ 2013
Our loving son, brother, uncle and friend, Thomas Lee Allen, passed away in his sleep on September 19, 2013. Tom was born to Silja and Lee Allen in Little Rock, Arkansas on July 5, 1981. He moved to Provo ten days later with the family. Tom was active in scouting and achieved the rank of Eagle Scout. After finishing high school he attended UVSC until going on an LDS mission to Birmingham, Alabama. He then entered the aviation program at UVSC. Professionally, Tom was an expert watch repairman and received top awards in sales. He was also a VP of Operations for a successful internet start-up. Tom enjoyed being an uncle, flying, hunting, fishing, camping, and BYU sports. He traveled widely with his family and friends and got along well with people wherever he was in the world. He loved his family and friends who were a very important part of his life.

I want to add a bit more here too. The picture on the right is from when Tom helped me go pick up a Corvette in Miami Florida. We flew in, picked up the car and drove the 2700 miles back in two days. There was no better road trip companion than Tom. The hours flew by and we had a blast cruising through the county. Yeah, Tom got a ticket and ran over a rabbit but that was just how he did things. I have so many good memories with Tom and even though we had a falling out in later years I will miss him more than words can say. R.I.P. buddy.

And that wraps things up for this stretch.