I’ve had a few door dings in my day but the first one on a new car is always the hardest. While my dealer was removing my old door sills (see post: 991 Illumuniated Carbon Fiber Door Sills) the technician accidentally made a tool dent in my door frame. I had a fair bit of empathy because I’d done the exact same thing while working on my Camaro. My primary concern was that everyone – myself included – recognize it was an accident and not get too stressed out about the damage.

I admit that I razzed the lead mechanic a bit, “Every time the sill illuminates the dent I’ll think of you.” Hopefully my humor doesn’t come across as mean-spirited. I told him I’d only bring it up for the next two years. Even though the dent was unintended my dealership was very apologetic about the situation and they were willing to do whatever they could to help.

We decided to try the dealership’s paintless dent repair guy. Accessing the proper location necessitated removing the seat and a good deal of interior trim and carpet. Once access was established the technician was only able to use his smallest too. In any event, some fairly good progress was made and the dent repair, althought not perfect, looks much better. 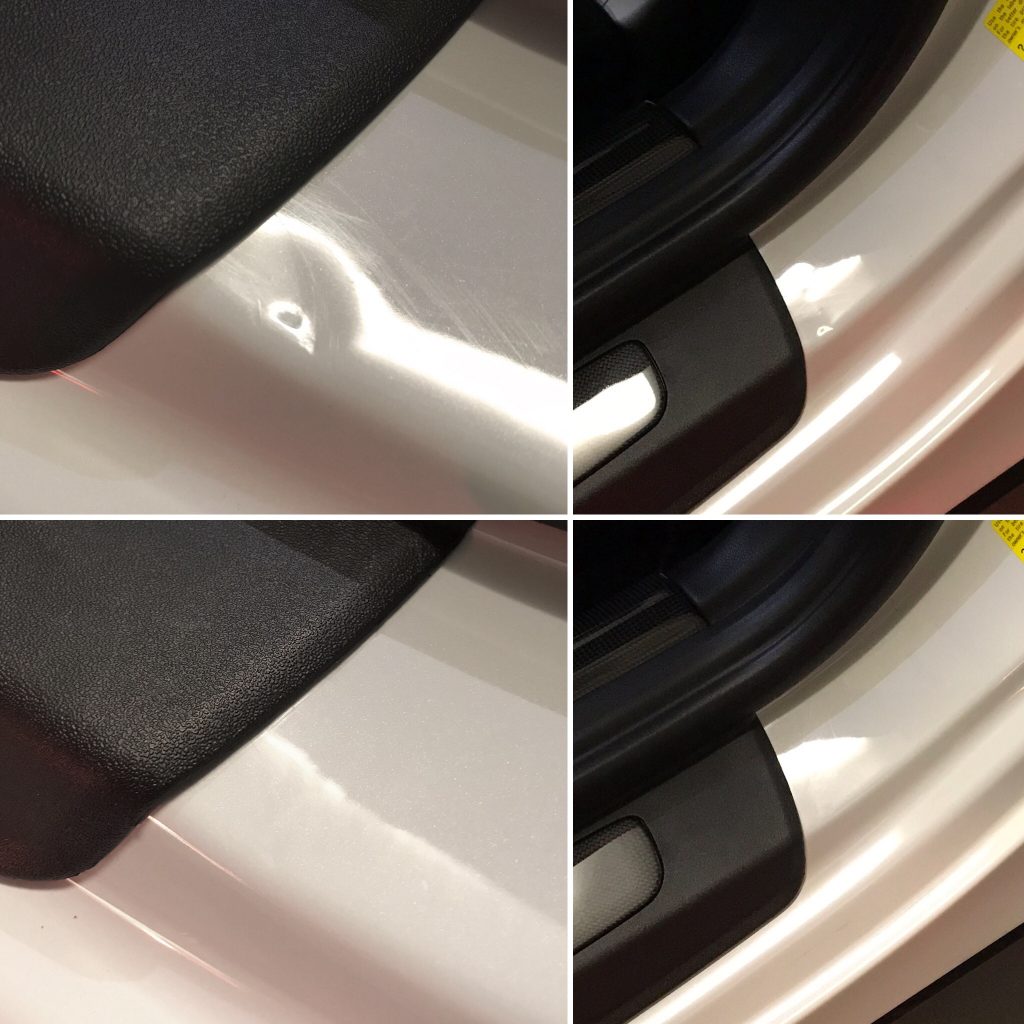 Top: Original Dent  Bottom: Dent diminished. Light reflection is really the enemy when dealing with dents. In many lightning situations the dent is difficult to see, however,  in other lightning environments it’s easier to spot (see below).

From what I’ve read dentless paint correction is an art that takes years of practice to master. Obviously I’m not a dent repair pro, but in my estimation the repair technician didn’t really have the necessary experience to completely repair the problem. In retrospect, I feel like they could have drilled an access hole to accommodate the necessary tools (there would have been no evidence of the hole) and a different technician may have been able to do a better job (I could be completely wrong on this). Even though the repair attempt was not perfect I appreciate the effort that went into it. 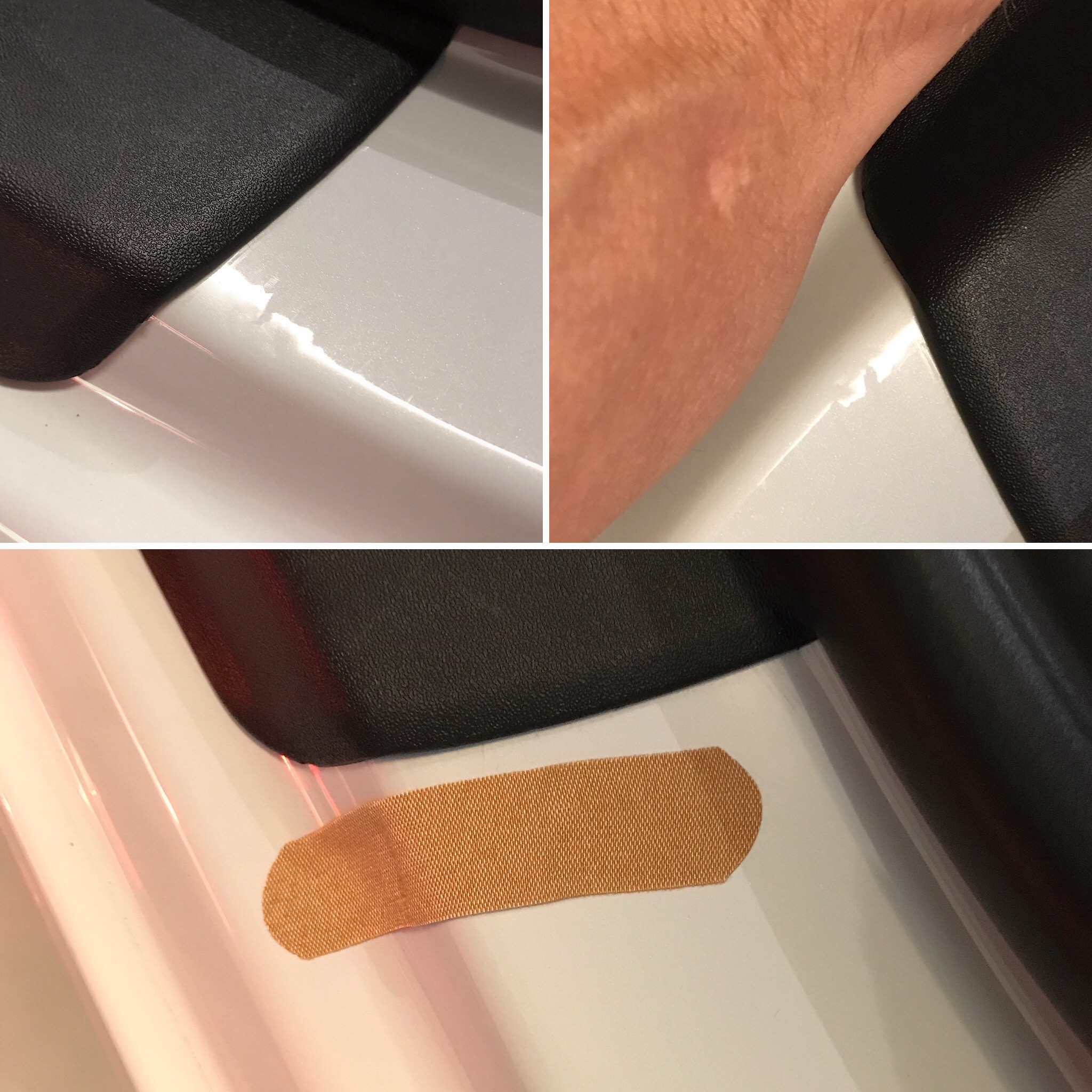 Top Left: In some lighting conditions light distortion, caused by the dent, is still present. Top Right: I am reminded of a time that a doctor removed a lump from my left hand. His lack of experience left me with with the pictured scar. My hand and my car’s body panel now have something in common- twins!  Bottom: Every time I take my car in for servicing I’m going to put a Band-Aid over the dent to try and be funny. Such eccentric humor is often unappreciated.

To be certain, I wish the damage had never happened. But it did and, frankly, it’s a good reminder of how our perspective regarding the importance of things can become distorted. As much as I like the car, it is just a thing. I probably won’t even own it in a few years. The dent has zero negative effect on any aspect of performance and, by extension, should not affect my enjoyment. Time will wipe away any negative feelings and eventually I won’t even think of the dent. But I will continue to enjoy driving my car, the illuminated sills and the relationship I have with my friends at the dealership. 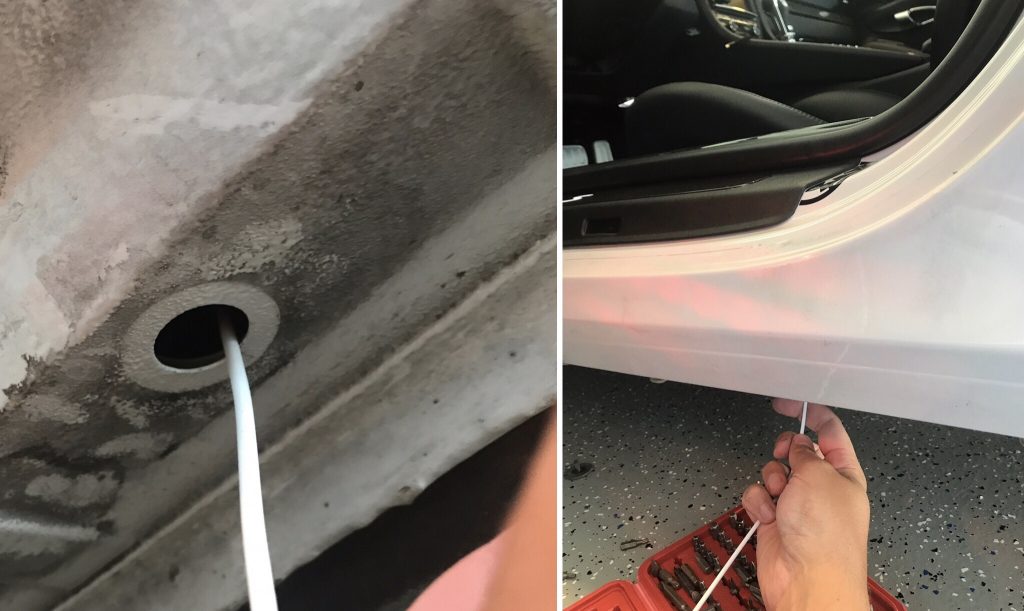 I had always wondered if the area with the dent could be accessed from beneath, given that there are some fairly large holes when the side skirt is removed. Since I happened to have the side skirt off today I checked. Alas, there seems to be a brace piece covering that area (you can get with an inch to the left of the dent). Still good to know!