For some strange and unidentifiable reason there are areas in our home where the Internet simply doesn’t reach via Wi-Fi. The main floor office is one such example. Our primary router (a Nighthawk X6) is in the basement (in the mechanical room) and feeds the entire house and yard quite well. However, that particular network simply doesn’t function inside the office. I picked up a Night Hawk X8 router and set it up in the center of the office thinking it could feed the office and work it’s way out the main and upstairs floors. Not so! The X8’s newly created Wi-Fi network was limited almost exclusively to the office! Even though it was overkill, I left that situation alone for awhile because it got the job done and met our needs. But I knew one day that something would interrupt the status quo.

All was well until I we needed Wi-Fi in the garage (for a computer and the Rainbird Sprinkler box). In hindsight I should have just run an ethernet cable to the garage when we built the house. But I hadn’t (maybe you still can!). There was still a way to potentially run an ethernet cable to the garage though.There’s a network jack in my bedroom which shares a common wall with the garage attic. I could set up a switch and then push a line into the attic and then down into the garage. Realistically it sounded like too much work.

Here’s what I tried first: I picked up a NETGEAR – PowerLINE Wi-Fi 1000 Access Point and Adapter. I plugged one end into an outlet near my router and plugged a LAN cable from my Night Hawk X6 into the Netgear Access Point. I went out to the garage and plugged the receiving end into an outlet. Sure enough! They found each other and linked.  However, the internet indicator was red, denoting a poor connection (I think it ended up being 3-4 mbps). Not great. I was lamenting my problem to a friend who suggested moving the Nighthawk X8 into my bedroom against the common bedroom/garage wall. Huh… that made a lot of sense. Sometimes you need another set of eyes om a problem. 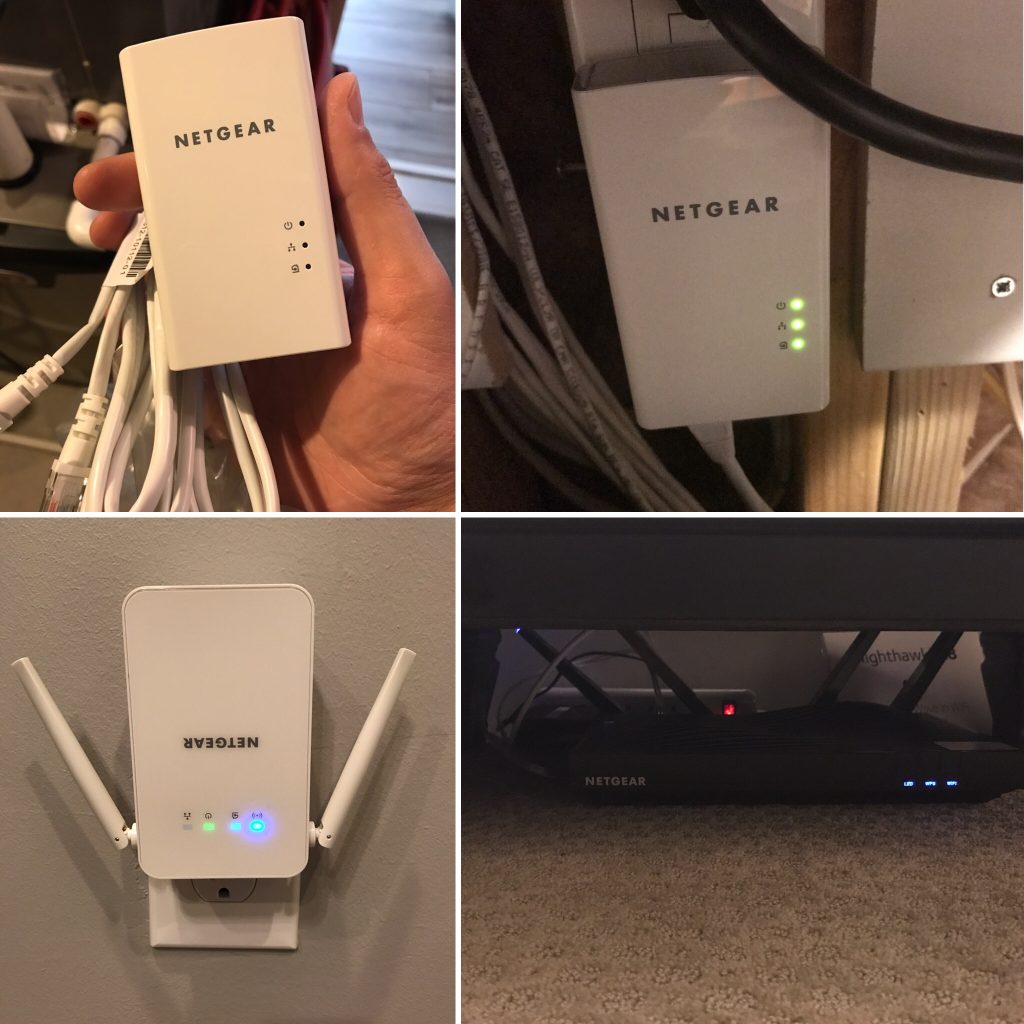 I started the process by moving the Net Gear 1000 into the office. If I repurposed the Night Hawk X8 then my office would need its router replaced. And what do you know? The 1000 linked up just fine from an office plug and after doing some testing I concluded that little Powerline 1000 could easily handle all the internet requirements of the office. Then I moved the NightHawk X8 upstairs. I connected it to the LAN jack behind my bed and stashed the Router beneath my nightstand for the time being.

In this new location the Night Hawk X8 appears to serve the garage much better than anything else I’ve tried (and it also works throughout the upstairs and main floor, minus the office- something’s wrong with that office…). I’m ending up with with about 20mbps download speeds which are quite sufficient. And the signal level seems very strong, and this is, in some ways, just as important as the speed. I really think the relocated Wi-Fi network will be a huge help moving forward.

Long story short: I solved  the Wi-Fi internet dead zone in my garage by moving my Night Hawk X8 to a better location. I added a Powerline 1000 unit to the office to provide Wi-Fi there in the absence of the X8. This was a cost effective purchase and a great example of successfully relocating existing assets. At some point I need to set up the networks so they are, for all intents and purpose, one large mesh network. Anyone want to help me figure that out?