I have been visiting with a friend who’s doing a major yard overhaul. One change he’s planning to make is to move his sprinkler system to a wireless setup so that watering can be controlled via a phone application. That sounded pretty good to me so I did some research to determine what I’d need to make a similar migration.

It turns out that I didn’t need much! I have Rainbird ESP-Me controller that was installed a couple of years ago when we put in our yard. I noticed that Rainbird offered a wireless module for this controller, however my particular unit was not compatible, due to it’s age. At first I priced out a new controller with the wifi module, but eventually I discovered that I only needed a new control panel (not the actual box with the station controllers).

A quick google search led me to YardOutlet.com. They offered a bundle package with the control panel and wifi module for about $130 with free shipping. They are located in Ogden Utah which seemed like a nice plus. I ordered Monday and, incredibly, I had my package on Tuesday. Whaaat? Everything came well packed and as advertised. Well done, Yard Outlet! 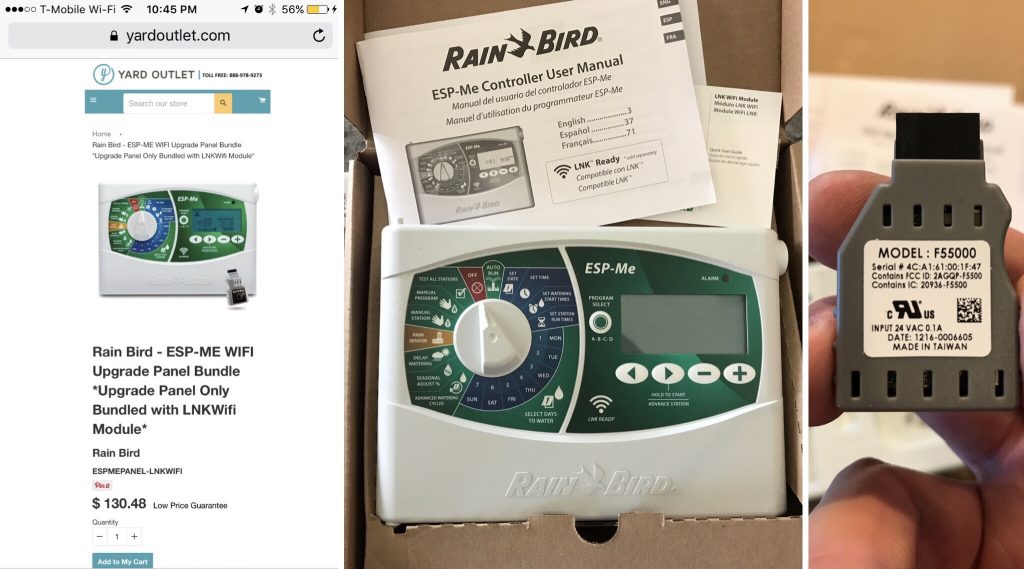 Replacing the panel was incredibly simple. All you have to do is unplug the harness, pop off the old control panel, put on the new one and plug it back in (I think I spent about a minute doing this). I reprogrammed my sprinklers from the panel and then set about linking the sprinkler controller with the Rainbird App.

Initially I had a little difficulty getting things to connect properly. I think part of that, in my case, was because the wifi in my garage is terrible (something I am working on fixing today). The Rainbird wifi module initially creates its own hotspot  and then, from the app, you move the module to your home network. Obviously at that point your phone needs to switch networks too and mine hadn’t which is probably another reason I got the error below. After a few tries everything seemed to be working and I was ready to try out the app.

After perusing the app my impressions are quite positive. It gives you all the same accessibility as the physical control panel. After you make adjustments you save them and the new program is written to your control box. Everything is fairly intuitive and you can even opt to have the app make watering adjustments based on the weather. The app control worked well on my wifi networks and via my cellular service (one thing to note- you can’t switch from a wifi network to LTE while you run the the Rainbird application- you have to close and restart the app for it to work properly).

Below is a quick demonstration of starting and stopping the sprinklers via the Rainbird application (complete with a silly kid in the background). Being able to control the sprinkler zones from my phone will make it infinitely easier to do testing and make repairs.

Overall, I think this is a very solid wifi sprinkler control set up, especially give how inexpensive it is. I’d give it my recommendation.

BONUS: A friend pointed out that this system may be eligible for a rebate. It looks like by adding a rain sensor I could get up to 50% back for my purchase. I might just do that…

BONUS 2: The RainBird app spends quite awhile getting the schedule and setting information when each connects to the sprinkler box. Originally I had thought this was because I had connected the unit to to a network with very low signal strength. I rearranged things and then connected the ESP-Me to a much better network. Sadly, the app’s load time was the same. I’m docking a half point for that.