Oh man- these past few weeks have intense. Personally intense, that is to say. I’ve been handling a lot of stuff. I am tired…

We started off the month by breaking our bed. I wish I could say that we were doing something exciting (yeah, you know what I mean) but the fact is it just collapsed when I hopped onto it. You can make fat jokes, but we’ve had this frame for a looooong time and it had developed some cracks where the wood joints are. Later that night Mike broke Claire’s bed while he was jumping on it. Two beds, one night. Long story short- most of us are sleeping with our beds on the floor for now. It’s actually kind of nice…

I spent some time fixing the dent in my Camaro fender. This was my first foray into auto body work. I bought the replacement part, had them paint to match and spent an afternoon fitting it in. Even though there was a small scrape on the front fender I opted to just touch it up instead of replacing the entire bumper. My insurance deductible is $700 and this cost me less than half. Overall I have to say I think I did an excellent job!

The kids enjoyed their last few days of summer by going to… somewhere with water. I’m not really sure where this is. Judging by the Astro Turf I’d say it was Seven Peaks. They appear to be trapped in some torso bubble with handles.
In honor of the summer’s end we built a massive fort in the living room. This required nearly all the couch cushions, pillows and blankets we could find. We used two fans for ventilation. The kids all slept inside the night we built it and it survived nearly three days!

Each Sunday one of the kids “helps” Fran cook dinner. This is Mike making some Thai soup. Fran said he actually got into it and did a great job. I had some soup and I can vouch for it’s yuminess. I feel like this picture needs a caption: “You want me to help? Okay, but I’m putting in some booze.”
And this is the children floating around at Libery Land. Or Trafalga North… or whatever it’s called now. Tip: Little kids (i.e. Chloe) can’t do anything at the park. Live and learn.

Mike had his first football game. He looks so tough (and cute) in this football uniform. He’s a little apathetic at times, but he’s a good blocker and made a great tackle during one of the plays.
School started (tee hee!) and our oldest three are now in school all day (bwah ha ha!). So far they all seem to be enjoying their new classes. It’s crazy how fast they all grow up.

One of the things that’s kept me super busy is trying to sell my cars. Maintaining / fixing everything has been a huge source of stress for me so I decided it was time to purge. Right now I’m in limbo- I’m really sad to see these cars go, but I’m hoping when the dust settles I can regain some sense of control.
Ode to the truck: You never let me down. You were always there for me. We moved little things, we moved big things and every time you moved me. Thank you old friend.
Ode to the Camaro: You looked great, you drove well. A little slow, a little hard to handle, but that’s just your nature. We had some good drives and you will be missed. 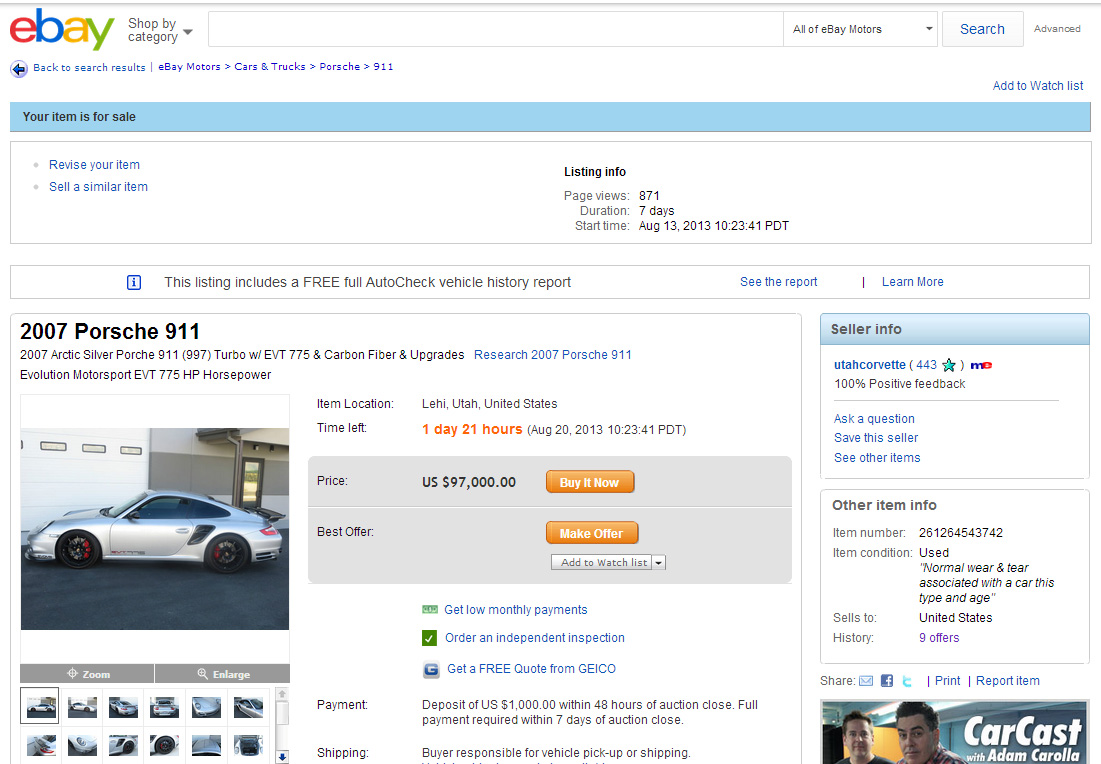 This one pains me more than the others. This is, in my opinion, is the sexiest car I have ever seen, let alone owned. Each time someone shows interest I want to cancel the auction, tell them it’s not available, tell them to go away. But I know what I have to do…
And the Vette… Still at RaceCo. I need to get it running. It’s the one car I might keep. But even that’s in the air right now. In nothing there is freedom. Do I sound crazy? Maybe I am.

I don’t see a good segue into the fact that Fran got a Yukon. The kids are old enough now that we thought maybe they could handle something a little nicer than our minivan (jury’s still out). We actually went up to Idaho to get this beauty (sorry we didn’t have time to vist Erin!). This is a pretty sweet ride. You ever had your butt cooled by your seat? No? Come on over.

I’ve spent a few evenings hanging out w/ the guys too – The Jorgensens are back in town for August so we have gotten together with Andrew a couple of times. Just like the good old days. Somehow we ended up watching Catwoman the other night. It hurt us all pretty badly, but the bond between survivors of events like these is strong.