Every morning Fran makes a veggie juice concoction and each morning I drink it. I think it actually might help! I just want to publicly thank her for taking good care of me. Biggest Looser is starting back up today and I’m pretty sure that will help jump start my health efforts.

Chloe turned two this past week! We don’t have giant parties for the little ones (we wait until they ask), but she still got a cake and some fun presents. Below is a video of her blowing out her birthday candles. Do you think she knows what’s going on?

Mike is about done with football for the year. He’s spent most of his time as a lineman (usually offensive tackle). His coach says he’s come a long way and he’s doing a great job. Here’s a video from one of his last games (he’s number 50):

For FHE we went and picked out some pumpkins (I think Macey’s is a good place to get them). This year they had some decorative pumpkins which piqued the interest of the kids. Part of me likes carving pumpkins (possibly next week) but another part of me wants to scream and throw them at people I hate.

Last weekend we took a quick trip to Moab for some biking and sightseeing.  We started our trip by discovering we had the wrong size hitch for our bike trailer which put us an hour behind schedule (and the bad weather didn’t either).  This was our first trip in the Yukon and the kids were pretty much glued to the TVs. Fran navigated us up I-15 to extend the road trip since the ride was so wonderful (this is sarcasm).

We opted not to rough it this time around and stayed at the Aarchway Inn. The room was spacious and well maintained (three queen beds!). The hotel property was also very nice and included a giant playground, a parkour course, picnic areas and lots of open space (some mud too… the kids loved it).

Biking didn’t go quite as we’d hoped. Getting the bikes & helmets adjusted took more time than we expected. And then only about 1/4 mile into our trip disaster struck. We hit a cluster of thorns that ended up popping seven of our tires. We were able to temprarily fix most of the tires and managed to make it another few miles down the path (which was beautiful) but ultimatley we had to cut our biking excursion short. I guess we’ll have to go back to bike another time.

On the way up to Moab I requested that we try to find good (tried and true) food to eat. Fran assured me that we would be relying on Trip Adviser and that I was in good hands. Our first day in Moab Fran said we were going to eat at the Mandarin Szechuan buffet. Once we had tried the food it was clear something was very wrong- it ranks among the worst buffets I have ever tried. Fran confessed that she hadn’t checked Trip Adviser. She had seen the Asian buffet, got excited and made an “emotional decision”.  It was bad food, but I have to say I think my wife is pretty cute!
Our next meal was at Zax (4/5 starts on Trip Adviser). It was better than Szechuan, but over all the mean was only so-so (really dry pizza). I guess you can’t necessarily trust reviews either.
What say ye Moab travelers- where should be eat next time?

On the way back from Moab we decided to trick the kids and made a detour to Dead Horse Point. Man, what a view! I found a good place to hang off a “cliff” for the obligatory “I’m about to die!” picture. If this had been real I’m pretty sure my kids would have stepped on my hands. 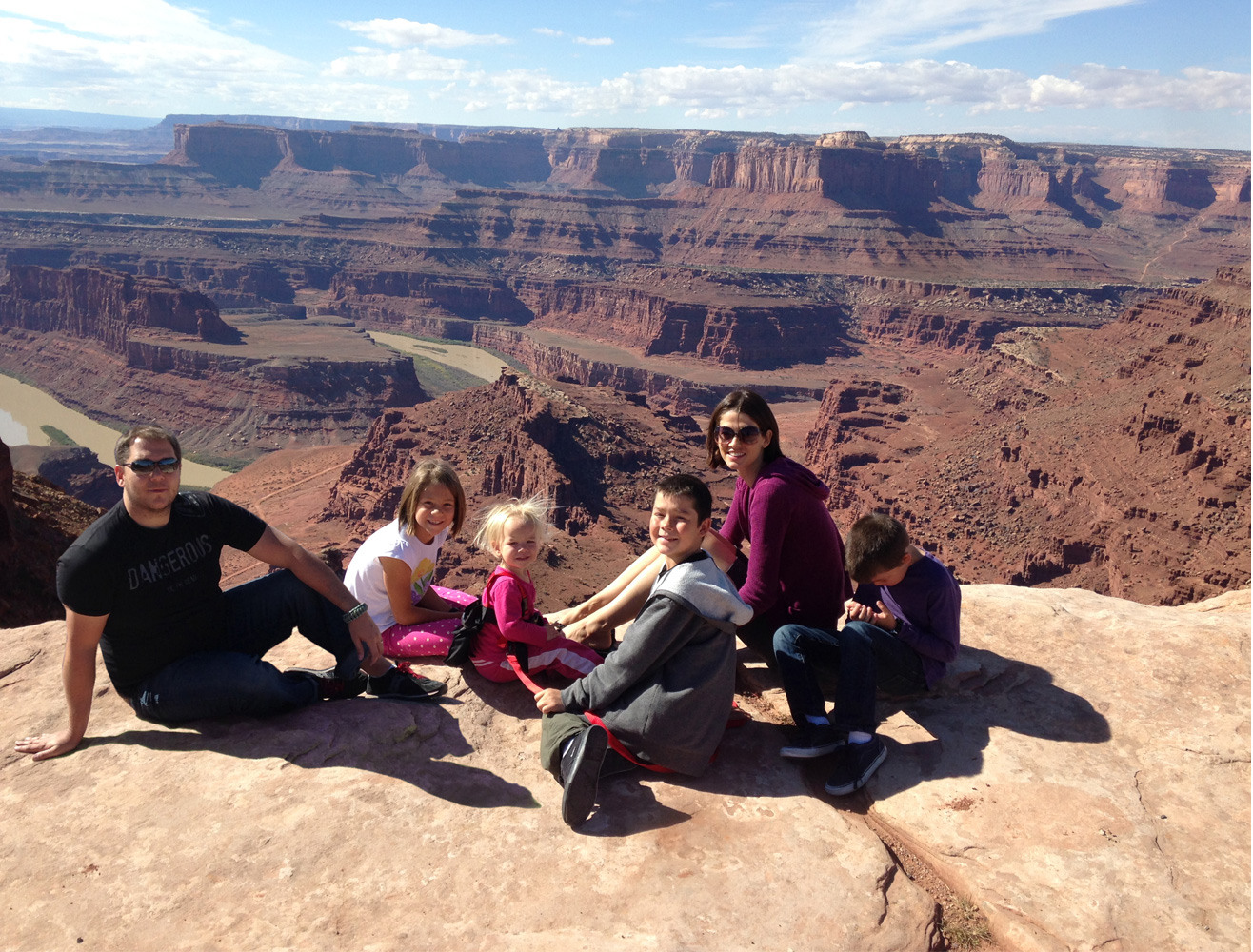 And a lovey panoramic view from the edge of Dead Horse Point. If you haven’t been here before it’s worth the quick detour.

Arches opened back up while we were in Moab. It would have been fun to do take a quick drive though the park, but the kids weren’t up for it. All in all I think we came away with a lot of good memories of trip that didn’t go quite right. Next time will be better.