Following the aftermarket part installation it was clear the car was going to need some tuning. This time around I decided to use Cobb and their Access Port. Back when I had my 997 I had to take out the ECU and send it in to EVOMS (shudder- such bad memories of those guys) to get a new map flashed onto the car. This made it nearly impossible to make small adjustments. However, the Access Port (AP) allows you to flash the a tune onto the car’s computer though the OBDII port! You can load on a new tune in just a few minutes. Additionally the AP logs data which you can send to a Cobb tuner and they can make adjustments as needed for you. This is a game changer. 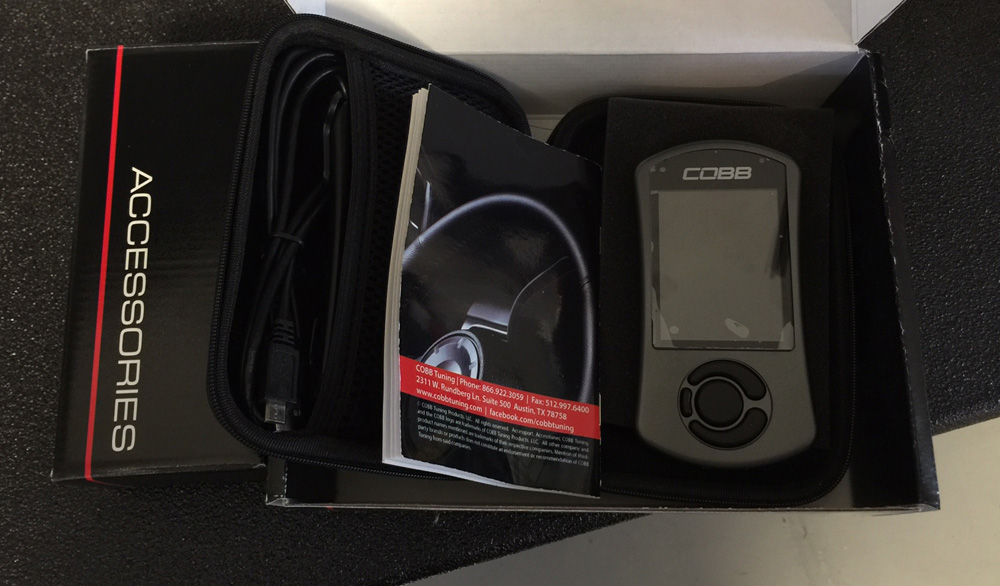 COBB Access Port Tuning Module- this is where the magic starts & how we make the magic faster.

Right out of the box the AP comes standard with a slew of off the shelf (OTS) tunes. Before putting my new parts onto the car I installed the OTS stage 1 tune. The low end seemed more powerful but I didn’t notice much of a difference up top. After the parts were installed I uploaded a stage 3 OTS tune. Again, more bottom end power but very little difference up top. It’s tricky to get a good tune in Utah. I’m fighting high altitudes, catalytic converters (restrictive) and low octane (91 standard here). This is one reason that it’s so important to be able to log data and make tune modifications.

The Cobb Accessport is a very cool piece of hardware. It allows you to tune the car from the OBDII port! After installing the Access Port software onto your car you can upload new tunes. The tunes can be tweaked by logging data (via the AP) and then sending it to a qualified tuner.

I’ve been working with Sam (at By Design) and Mitch (at Cobb) to try and dial in the tune. While there’s a lot of stuff I understand, there’s plenty that doesn’t make a ton of sense to me. When I look at all the data from a logged file some columns leave me scratching my head and I’m forced to put quite a bit of faith in the tuners. Below is a 0-140mph run of my third tune version.

The corresponding times for this run were pulled off of the Cobb Access Port.
0-60 in 3.013
60-130 in 9.693
0-130 in 12.706
At this point I didn’t have a good way to measure a quarter mile run. As I look back in time there are quite a few things I wish I had done differently- gather timing hardware beforehand, test and measure the car in stock form and measure results of each tune iteration. Hindsight…

I’m up to version 4 of my custom tune at this point and the car seem to be running well and I can finally feel a bit of the torque in the upper end. Probably one last tune will eek out all there is with the current set up. Realistically that won’t be much more than I’ve already got- there’s just too much working against us here.

After loading in version 4 of my tune I did an experiment and put some octane booster into my fuel (real octane booster). The data logs looked so clean it was unbelievable (almost no preignition / knock) and the car gained nearly a second in the 0-130 range. With tune version 4 and 93-ish octane here’s what I ended up with (these were measured with a VBOX and a mini review will be posted shortly):

That’s not too bad! I finally have a 10 second Utah car. Apparently if you live in Utah, spend a butt load of money and put in premium gas that we don’t even have here you too can run stock times! Yes, sadly these are pretty much the same times one might run if they lived in California at sea level and had just driven the car off a dealer lot.

If my research pans out I think I’ll look into a methanol kit. A methanol system would give me the equivalent off 115 octane. Given the positive effects of octane I’ve seen I imagine that this would add a significant amount of power and top end speed. I am clearly not very good at being content.

Update: Somehow I managed a new best time of 10.88 in the quarter mile… with plain old 91 octane in my tank. I wish I had logged that run (I have 3rd gear pulls from the same round I can look at though). The worst part was that I had my GoPro setup but forgot my memory card (ahhh!). Maybe octane wasn’t the magic ingredient- I will have to explore this a bit more.