I own a wired Razer Mamba and I really enjoy it. Why not take it to the next level? I thought and purchased the wireless version. I opened the box and was impressed by the presentation:

As I pulled everything out I became quite disenfranchised. What was this giant wire thing? It turns out that you plug the “wireless” transmitter into your computer’s USB  The Mamba is wireless in the sense that it communicates with the dock and it doesn’t have a cord that plugs into the computer (comical but frustrating).

Anyway, long story short…the wireless Maba has a cord that’s as least as long as the wired equivalent. I understand why (now); the wireless transmitter also serves as a charging dock. Maybe this is great for some people but I work at a laptop on a couch so it’s not viable for me to have a wireless mouse with a huge wired cradle. 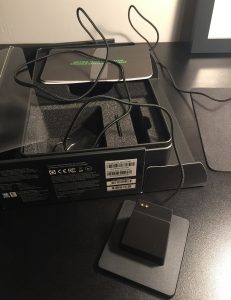 Anyone need a Raer Mamba? $100 shipped anywhere in the USA. Brand new.