UPDATE (October 16, 2011): Yes, I’m still hard at work adding stickers to my car! I recently found a company who manufacturers stickers that fit in the “CORVETTE” indentations on the rear bumper and  passenger dash. I picked Victory Red for the exterior and Cobalt Red for the interior.  The same company also offers black vinyl stickers to cover the white and yellow air bag warnings on the sun visors. Done and done! 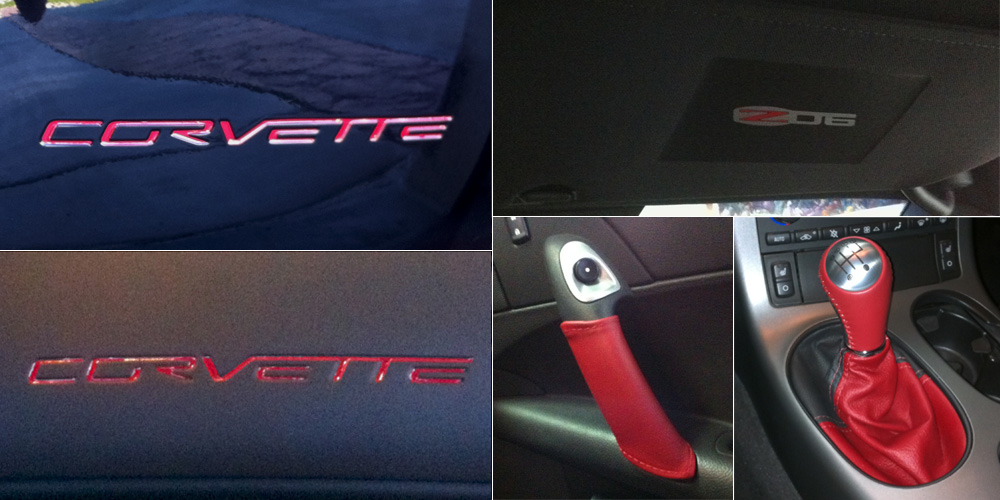 In addition to stickers I’ve been adding some  accents in the car. I recently installed a tone shift knob and some leather door wraps (both Cobalt Red) that match the seat. I also put in new Autometer ES series gauges (backlit red) and I’m considering replacing my gauge cluster with a red model. To me form is as important as function.

To begin with, I apologize for the pictures. First, because no one really wants to see them. And second because I took them on my iPhone. Cameras on phones have come a long way, but it’s still hard to take pictures in low light (a lot of graininess and motion blur), close ups, and anywhere you might need a half way decent flash. But you can’t beat a camera phone for convenience. But I digress. I now present to you my… quirk.

Plastered across my rear windshield is a “Benchmade” banner.  My company, BladeHQ, sells Benchmade Knives and, being a loyal fan and purveyor, I proudly advertise Benchmade on the back of my car. I also have a Microtech sticker (Microtech Knives are also very cool) but I’m not sure if there’s room for it right now.

On the front left of the windshield I’ve got an ACT sticker (I just put in a new ACT clutch) . The red and silver won me over. I’m a sucker for a fun sticker.

On the front right of the windshield I’ve got an HP Tuners sticker (this is the program I use to tune my car). I thought the white added some nice contrast.

On both sides of the car, below the Z06 badge, I added custom “800 HP” emblems (from West Coast Corvette). I unabashedly promote the current crank horsepower of the car in the same way the stock C6  Z06 badge does (in tiny red letter it says, “505 HP”… but it’s not anymore!). I get a lot of flak for this, but I can take it.

Inside the engine (on top of the intercooler) I’ve got a little plaque that that has the engine specs for the LS7 (left side) and then an “LS7” emblem (right side). They add a nice little splash of color to the engine bay (can you tell I like red, black and silver?).

And of course I’ve got my car peppered with various red Autobot decals. Yeah, maybe I need some help. I try not to make things tacky (believe me, everything looks much better in real life), but it’s possible that I do go overboard sometimes. To my credit I haven’t added a “twin turbo” emblem…. yet. But then again,  I am guilty of putting a Hannah Montana sticker on the drill press at work and insisting that everyone refer to it as “Miley.”

Anyway, I hope this handy guide will help you to recognize my car. It may be hard to see anything though, since I’ll be blowing past you at light speed. Ooooh!