I’m doing this blog post before I make a YouTube video this time. A lot of my posts these days seem pretty lazy to me. I just pop up a video and blurt out a few thoughts after the fact. Back in the good old days (when I didn’t make videos) I feel like my posts were a bit more thoughtful. That’s what I’m going for here.

When I had my Corvette I remember one of the things that really bothered me was the wheel gap.It was such a big deal to me that I contemplated spending about $3K on drop spindles (not including any installation costs). You can drop a corvette up to a 1/2″ on the car’s stock lowering bolts but knew I wanted to go at least an inch. Of course that didn’t matter because I ended up selling the car long before I got around to any mods like that.

Quite a wheel gap you have there!

When I got my 991 the wheel gap wasn’t large enough to demand my attention. I had lots of other things to do first…

Stock wheel gap here isn’t too bad. It’s hard to believe my car used to look like this 🤔

Fast forward a year or so and dropping the car was on my radar. After doing some research I settled on GMG’s lowering springs and ordered a set. I debated about whether or not to install them for nearly a year. My primary concerns were threefold:  1) How would the springs would affect the ride? 2) I felt stressed out about rubbing the front of the car when I drove over dips and uneven roads* (I have had other lowered cars and have done my fair share of nose grinding). 3) Would the stock wheels look okay on a lowered chassis (the centerlock offsets place the wheels a few mm inside of the fenders).

*This is a big deal on the 991 Turbo series because it has a retracting front spoiler. If you rubbed the underside of the car’s nose you’d actually be grinding the spoiler on the ground.

Eventually I decided to just go for it. I hoped the retractable front spoiler design would allow the car to have the clearance it needed. And who cares about ride quality when your car could look a little nastier. Plus if things didn’t looks right it would be a great excuse to get a new set of wheels. Can I get an “Amen”?

The guys @ Ken Garff were nice enough to take a few pictures of the install for me along the way. Don’t forget- when you have these installed you need to realign the car!

I dropped it off at my dealer on Monday and picked it up on my birthday a few days later. The install went well and when they did the alignment everything was within spec. I couldn’t believe how much of a visual difference the drop made (it ended up being abut an inch). Somehow it changed the car’s whole stance. The reaction at the dealer seemed very positive- several people there expressed how much they liked the modified look.

This is the ride height difference. The bottom of the wheels here are lined up with each other and you can see the gap difference which ended up being about an inch.

My concerns haven’t played out at all (yet?). I don’t really notice a difference in ride quality. It might be slightly stiffer but it’s extremely minimal. No undercarriage rubbing so far (although I still have a few places I haven’t gone yet that worry me). As for the stock wheels- they look good! Would they look better pushed out a hair? Perhaps… but I’m not even going there right now. So for I’m really pleased with this upgrade. Or maybe it’s a downgrade. Recommended 👍

Below is the video I eventually compiled: 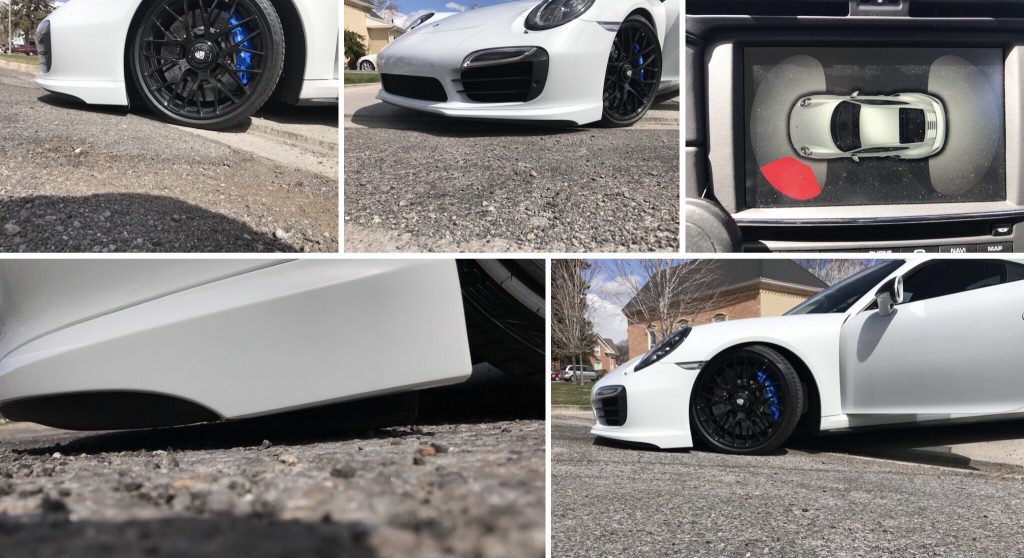 From the video: Turns out that some dips are pretty tough to get through. All in all, 99% of the places I drive have been fine (I even went out and did some late night testing of areas where I know I’ll be driving the car).

It’s been another busy month. Busy on the home front (seems like there’s something going on every day)  and busy on the work front (I think we’ve finally settled in, but the business never sleeps). Sometimes I wish I didn’t need sleep. And believe me I’ve tried to get by with nothing. For awhile I actually slept every other night (that was a bad idea). Time is just so hard to come by. That’s been on my mind a lot lately- lack of time. Maybe I just manage my time poorly. I could be exercising instead of doing this blog post!

Speaking of exercising… Rachel organized a relay marathon a few weeks ago. Each of the five members on the relay team runs a 5K section.  Fran trained for it blazed through her section in about 47 mins.  That’s basically five ten minute miles. Not bad! Makes me want to train for a race.

Speaking of races… A couple weeks back Jim, Justin and I hit the Rocky Mountain Raceway for some midnight drags. Anyone who hasn’t gone should check it out- $5 to go watch people dual it out in the quarter mile. And a mighty dual it was. Corvette vs. Corvette vs. Camaro I  ran a 12.1 at 131mph, Jim ran a 12.2 at 121 and Justin ran a 12.3 at 117mph! It was a super close race between Jim and I- he had me until about 90mph. You can check out one of our races and some pictures on Jim & Cindy’s blog. We were all hoping for 11 second runs, but we’ll have to get a little faster.

Speaking of a little faster… That’s what I plan to be shortly. I recently picked up a copy of HP Tuners. This nifty little software package gives the user control over every aspect of the car’s engine computer (yes, this can be very dangerous) . I need to pick up a few more things before I’m ready to start seriously tweaking, but I predict a predict a lot of fun… or tears.

Speaking of tears… I’m guessing people who shelled out 4K or 5K for a Dell color laptop ten years ago have shed a few. In the past couple of weeks I’ve gotten two laptops and I can’t believe all the computer you get for the money these days. The little guy above to the right was $279. It’s an HP Mini Notebook from Best Buy (I think this model might only be available though them). I got it to use with HP Tuners and it stays in my car- fits perfectly in my glove box. It has a 16 gig solid state drive (important to me since it will get bumped around in the car) a gig of ram, a 9″ 1024 x 600 screen, high speed wireless, USB outs, – everything that would have cost thousands of dollars a few years ago. The other laptop was a Dell Studio XPS. Again- an amazing bang for the buck.

Speaking of bang and bucks… A couple of nights ago we went to the Ringling Brothers and Barnum and Bailey Circus!  I haven’t been to a circus in years and I have some really good memories from when I was a kid. Aside from trapeze performers they had all the good stuff I was expecting. We got to see magic acts, a ton of awesome acrobatics, people shooting out of a cannon (bang), clowns, tigers, elephants, tightrope walkers and more. I have admit it wasn’t always easy to follow everything- at  times there was so much going on that the ring seemed chaotic. And it didn’t help that our kids seemed to have an endless queue of needs.

It may seem terrible to say, but if we were to go to the circus again soon we might leave some (or all) of the kids home. We willingly bought $10 cotton candy and a $9 lemonade (bucks) to appease their ceaseless demands for food, but Mike wanted popcorn as well ($12). We said “no” so he folded his arms, arranged a giant frown on his face and announced that he was wasn’t happy. He managed to sulk all the way home. That kind of put a damper on festivities. Gabriel was also a handful, but he’s 2- we can cut him some slack. Hopefully Mike will remember that we went to the circus and not that we refused to buy him Popcorn. I guess it’s hard to be a kid.

I always get confused when I post- I can’t remember if the pictures go first and then I blab. Or if I blab first and then put a picture. Ah well- I’ll let people figure out which blab goes with which pic. Until next time.