If you know me then you might know I like to bring back “art” when I travel (just to be clear I don’t travel a lot). In California Adventure’s Off the Page I found this little beauty by Mike Peraza (I collect Disney art). It’s a cool clash of old and new as characters from the original Ducktales series run into their contemporary counterparts. I definitely wanted the picture but decided I’d come back for it the next day. In the meantime I looked online to see if I could get it there (and possibly save a few minutes by having it shipped to me). Curse me Kilts! Someone was selling it on eBay but the price was $699. They had cleverly cut off the bottom of the price tag, however I had taken a picture of it earlier: $195. 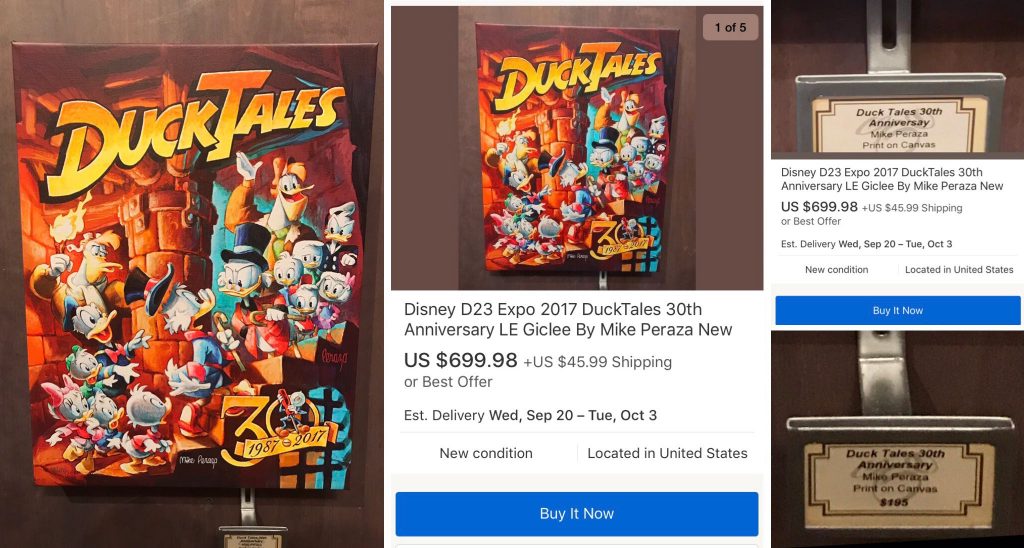 Yes, some dude with a season pass was taking pictures of Disney merchandise, listing them on eBay and making a tidy profit! Clever. I gave the guy some begrudging respect and then went back to Off the Page to make my purchase (well, rushed back is more like it). The girl helping me mentioned that she had sold another just a few hours before and that the one I was buying was their last one. Disney knows how to make suckers buying their loot feel sooo good (although it took her 20 minutes to ring me up and pack up the art). This is a limited run of 95 canvas prints.

Also a plug for the new Ducktales: you can watch the first episode on Youtube. The voices take some getting used to but I thought it was an excellent reboot!

This morning I watched the oral arguments made by both Vid Angel and Disney in the federal appeals court. It’s available online for anyone who’s interested (in fact I’ll embed here on my blog):

For anyone not familiar with Vid Angel or the current situation here is a quick summary: Vid Angel is a filtering company that allows customers to purchase movies and stream edited versions to their homes. Disney, Warner Bros. Entertainment Inc., 20th Century Fox Film Corporation and Lucasfilm Ltd. LLC are suing Vid Angel claiming that their filtering / streaming service violates copyright laws. Back in December of 2016 an injunction was filed against Vid Angel (and later upheld), effectively shutting down their service. Today was an opportunity for Vid Angel to argue against the injunction in court.

While I enjoy most of what the aforementioned entertainment companies offers (i.e. characters, parks, merchandise, etc) and understand the value of IP, I would really like to see the current injunction lifted. I think the issue of copyright here (especially in relation to the Family Movie Act and the Digital Millennium Copyright Act) is extremely complex and needs the full focus of the courts to be understood. In between now and when that court battle is actually decided I believe that Vid Angel should be allowed to operate. I strongly believe they provide a needed service, I don’t believe there is financial harm being done to the studios* and I believe the studios aren’t being fair to the end consumer.

* For those who think Vid Angel needs to get streaming licenses I make the counterpoint that what Vid Angel does is essentially a streaming version of Redbox (not illegal). However, Redbox has an agreement to delay some releases, which I think is an acceptable compromise. I will also point out that Vid Angel attempted to obtain streaming licenses and was rebuffed. I, and many others, would happily pay more for the ability to watch licensed edited movies, but if studios disallow filtering companies from obtaining those licenses then…

Based on the arguments I saw I would guess that the injunction will stay in place, in some form or another. As I already mentioned the law on copyright is difficult to interpret, (and also of note much of it was created prior to digital streaming technology). What makes me the most upset is that movie studios pretend that they are not violating our right to censor content we have purchased. It’s like throwing someone in a trunk, dumping the trunk in a lake and telling the person in the trunk they “are free to do whatever they want.” I want, no I have, the right to censor what I watch. Vid Angel provides the technology to enable that right to be realized and I genuinely hope the courts can see that there’s no viable alternative.

BONUS: Sony Pictures recently announced that they are offering cleaner version of some their movies. Predictably some directors objected- “directors” like Seth Rogen. Leave it to people in Hollywood to try force their morally bankruptcy perspective on everyone. Thanks for being  a dick, Seth.  If Hollywood wants to make crass garage that’s their right. If I want to edit their crass garbage that’s my right. At least Sony recognizes not everyone watching movies is a degenerate (exaggerated for effect, obviously). FYI:  anyone who says “Just don’t watch those movies” absolutely misses the point.

This past Friday Fran and I took Claire to see Disney on Ice (Worlds of Fantasy) at the Energy Solutions Arena. We decided that she needed some alone time with just the two of us, so we left the boys with my parents (we’ll take them to a monster truck rally or something another time).  We sat right up in the front so she’d have a good view (having learned a lesson from our trip to the circus).

The show was pretty fun. First the gang from Cars drove around on the ice. Then we were treated to numbers from The Lion King, The Little Mermaid and finished with a Fairy finale. The choreography and costumes were all very good and I think it’s safe to say that we enjoyed the show more than the circus.

Our refusal to buy $11 ice cream cones and $10 lemonade and cotton candy resulted in tears (much like the circus). As we left the show Claire announced “It’s not a good day!” Maybe we’re doing it all wrong- maybe part of the show is buying overpriced food and merchandise. But I’m not giving in just yet!  We did stop for ice cream on the way home. Thanksgiving Point has a nice little ice cream parlor and even on Friday night there’s never a long line.

As the kids get older it gets easier to go to events like these. We’ve got a few more planned in the next couple of months and we’re looking forward to them.  We may even attempt some movies. Oh yeah- it’s crazy time.