St. Patrick’s Day is always fun around here. The kids dress up in all kind of different green outfits (I think they referred to themselves as the “Leprechaun Gang”).

Fran and the kids made Shamrock cookies and I made the kids a pop-up card (Claire makes really cute pop up cards all the time so I thought it would be fun to make one for them).

Jim, Cindy, Fran and I hit Ruth’s Chris for some birthday steak. It was, as usual, delicious! Ruth’s Chris is the only place that can ever seem to cook a steak just right. I like mine rare and I cut pieces off and let them sizzle a bit on the 500 degree plates. Anyone else like their steak rare?

I turned 35 this March. There’s nothing particularly memorable about turning 35, but it was a nice birthday. Fran made me pecan pie and we watched Condorman. The kids (Claire & Gabe) gave me Kit Kats.

Blade HQ’s new store had its grand opening on March 29th, 2013 (and it was also our ten year anniversary). My Mom, Fran and my kids came by, spun the BHQ prize wheel, ate some food and hung out for a little bit. It was a fun (and exhausting) day.

As is tradition we colored eggs for Easter (I make some striped eggs for Chloe since she was already asleep… and because she has very spastic motor coordination… and because I wanted to).

On Sunday afternoon we had an Easter egg hunt in our backyard.

This was the first Easter where Chloe sort of understood that she was supposed to find eggs and put them in her basket.

We finished off our day with a trip to Olympic Park. We played a bit of freeze tag and took a walk along the Jordan River trail. Lest anyone question the activity’s Sunday appropriateness know this: as we walked along the trail we were visited by the Easter Bunny himself.

We hope everyone had a wonderful Easter!

May 2, 2017 – Not sure whey I never posted this. Maybe because it’s not interesting? No… most of what I post isn’t interesting so that’s not good logic. I’m at a loss. Behold, I give you rotors! And it looks like it’s Corvette rotors and Porsche rotors. You lucky lucky people.

Since I had upgraded my amps I was cruising around adjusting the stereo. In the course of my drive I hit WOT a couple of time (i.e. freeway onramp- nothing crazy). Something seemed off, but I wasn’t sure what. I popped the hood for a quick look, but didn’t notice anything amiss. Later I took the car for a quick spin to see if it was feeling any better. It had a rough time starting- died three times, then idled like crap and drove about the same as the night before. As I was driving a hint of gas fumes was present but I chalked it up to an old car next to me. Still, when the fumes persisted I turned on my heater and was blasted with gas fumes. I took the car home, left the engine running and had a look:

Probably not something I should be driving around with! I pulled out the leaky injector and discovered there was a pretty big hunk of o-ring missing. I bought some OEM rings and made the repair. No leaks, so that was a good start. But the car was still having some issues.

I felt like the issues must be related to the injector, but they seemed like symptoms of a boost/vacuum leak. The car wasn’t boosting past five pounds (it’s supposed to top out at six), it wasn’t starting well, it was idling rough and air/fuel ratio was much too lean when the car was fist starting. Here’s some video documentation:

Thinking maybe the o-rings that were used could be the issue (you can have an air leak through your injectors) I replaced them with OEM ring on the other seven injectors. Sadly, when I started the car there was little to no change. I inspected all the turbo piping, but wasn’t able to locate a leak. There’s not much more I can think of to do so I took the car back up to Premier to have them trouble shoot it.

They didn’t find anything mechanically wrong with the car, which was surprising. All signs seemed to point to some type of air leak. And all the problems manifested at the same time which made me think the problem would be mechanical.

The current plan is to reflash the computer to its factory state and start the tune from scratch. It’s been a couple of weeks, but hopefully they will make some progress soon. With nicer weather on the horizon it would be nice to get my car up and running again. I guess this is the price we may for progress. More updates to come.

The weather outside looks amazing. Winter was really getting to me so I’m stoked that spring is here and the temperature has reached a tolerable level. I might actually go outside soon!

Fran dropped off the kids for more skiing lessons and did some snowshoeing with Chloe. For some reason or another Gabe doesnt’t seem to have any interest in skiing yet. Guess he gets to learn with me next year.

The yearly Blue & Gold banquet was a smashing success. The night included good food, an entertaining magician and Mike got his something-or other belt loop (yeah, I just wrote that). For me the Blue & Gold means the pine wood derby is coming up soon. We’re looking forward to that.

A few weeks ago I went to get something out of our storage unit but it was frozen shut! When the roads were plowed all the snow was pushed against the doors and, as it melted and refroze, it sealed them shut. I could see my handle through the ice… taunting me. After many salting trips I was finally able to lift the door, but…

…all the melted snow had gone into the storage unit. There was a sheet of ice about 6 feet back into the unit and water past that. Most of the items in storage were off the floor, but a couple pieces of furniture sustained a bit of water damage. I’m going to find somewhere better to keep my stuff this year. Maybe I should just throw it all out.

Family games with the family are getting more fun. We played Clue last week with Mike and Claire. Both did really well, but Mike gave Fran and I a run for our money (he actually won a game, but part of that had to do with Fran blurting something out by accident- ahem). Next up: Twister.

Mike has been doing a lot of coin collecting lately. I mentioned it to my friend, Justin, and he dropped by to show Mike his collection. Justin even sold him a few coins (for a great deal, of course). Mike’s paramount criteria is age- the older the better. If you have any old coins let Mike know! 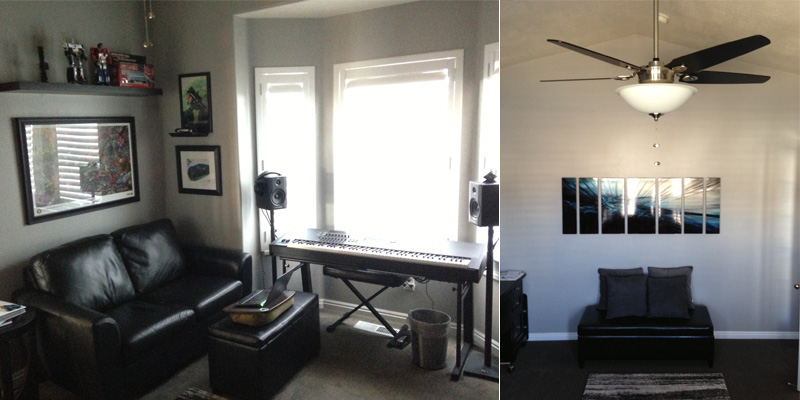 Our home office remodel is finally done. I still take all my pictures with my iPhone so these aren’t great (I probably couldn’t take great pictures with a nice camera either) but you get the general idea. Fran let me decorate it sort of like a man cave with greys, blacks – cooler colors and devoid of charm- that sort of thing. Ha, look at me- pretending to be sophisticated! 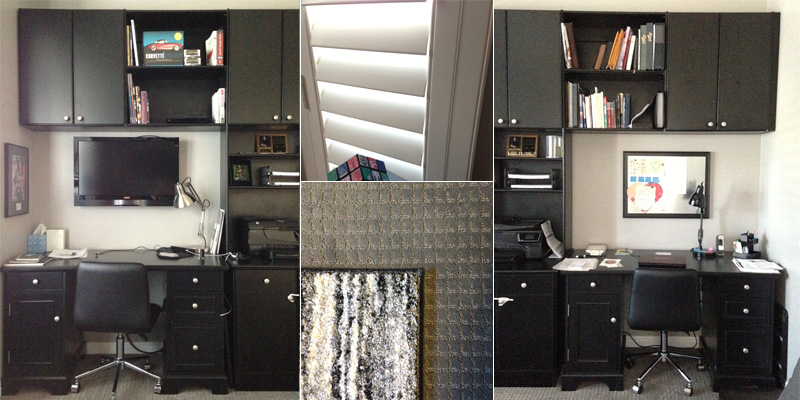 White shutters, two desks, built in cabinets, love seat, electric piano, a couple of ottomans, a  ceiling fan, one rug and and a solid week’s worth of blood, sweat and tears. I don’t know how/why it took so long to get everything done but I’m really happy with how the office turned out. A big thanks to everyone who helped (Fran, Stacy & Classy Closets).

This is a great commercial and Jeff Gordon does a great job driving this Camaro (and it’s passenger) to the limit. (10/22/2017 – I guess they pulled the video… but rest assured, it was great).

Yes, yes- it’s a little too good to be true (but still a lot of fun to watch). The biggest problem with the commercial is that there is no such thing as a 2009 Camaro. Once Jeff and the salesman are seated in the Camaro it’s clear from the steering wheel it’s a 2012 model. And what’s with the cup holder by the vents? Word on the street is that Jeff didn’t even do his own driving. Fake reality TV is all too common these days, but it’s still well engineered to entertain.

I actually had a silver 360 awhile ago, but sold it to a friend. I regretted it for awhile and decided I wanted a black one.

I finally found one at Gunnies. Gunnie’s experience was okay. They don’t make you feel like they’re very interested in you.

I didn’t like the original handle on the gun so it got swapped.

The gun was painful to shoot. It’s so light that it can’t absord enough recoil and it just wrenches your wrist. Regardless, very fun.