I’ve got an awesome Sony Z series laptop. It’s small, powerful and – get ready –  it’s got a 13″ LED backlit 1080p screen. It’s almost like having a 13″ iPhone 4 retina display-  absolutely amazing. And everyone who looks at the screen says, “Wow! That’s incredible!” which is inevitably followed by “Everything is so small. How do you work on that thing?”  I have to admit that sometimes it’s a bit difficult to see things and I find myself using the zoom shortcuts a lot (Ctrl &  “+” or “-“). I probably would have just lived with it (I consider it a minor inconvenience), but work got to the point where I simply needed more screen real estate.

I’ve actually tried to add a second monitor before, but I ran into a couple of snags. That monitor didn’t have an HDMI input and when I tried to hook the monitor up using the VGA connector my laptop power supply actually caused some screen distortion (rolling waves of color).  I finally caved and bought a new HDMI ready monitor (23″ 1080p Samsung B2330). Wow. My dual screen set up has been awesome. When I work I typically have about 2-4 IE windows open (each w/ several tabs), Photoshop, several work applications (i.e. our telephone HUD) and several Windows folders. And yeah- those two screens below have the same resolution. 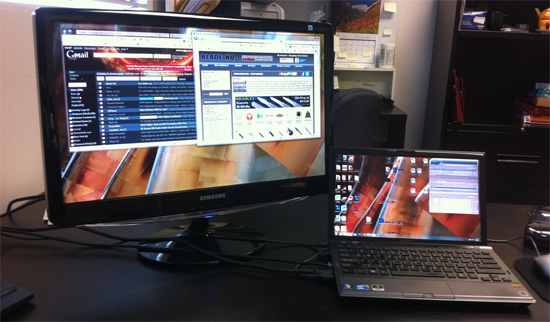 If you go the dual screen route I strongly recommend using the HDMI interface. My laptop has had no issues with the HDMI connection; I plug in the cable and I’ve got two screens. Using the VGA connector required me to continually adjust the resolution, screen position and messed up the icons on my desktop.

Also, two tips:  1) HDMI carries audio as well as video. If your monitor has an audio output your laptop might configure itself to output audio through the HDMI cable. Just right click on the speaker icon on your menu bar and choose “playback devices.” Click on the speaker icon (or whatever you want to use) and set that as your default. 2) For some reason when you connect a 1080p monitor to a PC via HDMI part of the screen often gets cut off. You can correct this by changing a setting on your monitor. Just make sure the monitor is set to “PC” mode and everything should fit A-OK (thanks Jim!).