When you have extra power it’s fun to know just how much you have. You can guess, but until you put your car on a dyno all you have are hopes and dreams built on educated speculation. As of now I’ve had my car on two dynos and the results were pretty close.

Right after having the car tuned (and having methanol added) Marc put my car on Joe’s DynoJet. The first few runs they did without Methanol and the car kept slipping. But they finally got a good run with the methanol and it put down 693 WHP & 660 lbs of torque (although at that point it the car’s temperature was elevated- typically later runs have reduced power).

Earlier today I went to Adam’s work to use his DynaPack (the car bolts right onto the dyno, as opposed to sitting on a roller- the different types of dynos are pretty cool). The first run was the best (since the car was still cool) and the car put down 682 WHP & 708 lbs of torque. Supposedly the readings on a DynaPack are more accurate, but as I mentioned both of these runs were really pretty close.

These runs were both done around the same time of year and both on pump gas (91 octane). There are a few differences between the setup when the car was on the DynoJet and this more recent DynaPack run but I think they are pretty negligible (a few tune tweaks, different clutch, etc). Overall, not too shabby (close to 800hp at the crank and a butt load of torque). It’s actually about what I’d get out of Lingenfelter’s $50,000 upgrade kit (although I’m sure my set up is far less bullet proof).

I can’t help but lust after 1000 WHP though. I think I might actually take the plunge this year. The warranty is up on my 2007 so I feel like I should either trade it or modify the hell out of it (or into it). Not sure what I’ll do yet. But for now I suppose I’ll have to be happy with my 680 beautiful rear wheel horses.

This winter has been so mild over here it’s a little unsettling. Still, it’s fun to have some extra driving time.

But nothing ever comes easy or without consequence…

Last week I decided to run some errands in the Vette. I hopped in, hit the ignition button and heard the dreaded clicking. This was super annoying because I’d just charged the battery a week earlier (the drain was way too quick). I tried to jump the car- twice. No luck. Time for a new battery (after only a year and half?). Getting the right battery for the Z06 (locally) isn’t simple. In fact I’ve been using an AutoZone battery that was almost a match. This time I switched over to an O’Riley battery that was a closer match to the factory battery (one day I might break down and get the right one…). Anyway, the switch went pretty painlessly and I was back in action pretty quick. I couldn’t believe how much better the car ran with a properly working battery. Come to think of it, the more I drive my car the better it seems to run (I know, “duh”).

And sometimes I think the universe is out to  get my Corvette.  Lately I’ve been doing some body repairs that I don’t think I should be dealing with. I was cleaning rocks out of my body panels (a consequence of Utah roads, I guess) and I noticed that part of fiberglass body underneath the car was cracked (around a bolt). After careful consideration I have two theories: 1) Someone (not me!) tried to jack the car up in the wrong location and broke part of the body. I don’t know who would have done this or when it could have occurred (especially since I do most of my own work). 2) The time I rolled over the exhaust tip and heard what sounded like an explosion may have caused this damage (I looked around under the car right after it happened but didn’t notice anything). Anyway-  I had to remove the cracked portion of the body and I used a large metal washer in it’s place. It’s effective and no one will ever see it… but geez! That probably added an ounce or two of weight!

And then the other day I noticed that my chin splitter (under spoiler) was hanging off the car a bit. I jacked it up and discovered that the bolt that holds the tip of the spolier on had been ripped out from the body (literally took a piece of the body out with the clip).  I’ve bumped the nose of my car before and I know when I do it. Ripping this bolt out would have take force that I think I would have noticed. Again, a washer to the rescue (I use them to fix everything, but it’ another ounce). I remounted the spolier and it’s nice and secure. Although it’s pretty scuffed up- probably the result of the car being lowered.  And while I was under the car I also noticed that I was missing about four hex screws (the ones in the background of the center image below) in various locations. No idea where they went, but I put in replacements (you can get them at any Lowe’s) and felt much better.

Speaking of stuff I need to get in the coming months- I need a  transmission overhaul. The synchros in my transmission are having some issues. I’m a little surprised I’m having this problem given the infrequency of abuse my car sees (and the fact that it only has about 15,000 miles on it). Once the trans warms up there are really no driveability issues at all, but when it’s cold it can be sticky and occasionally grinds when shifting. I have some fun money so it’s very possible that I might simply pull the trans and put in something a bit tougher. No idea what kind yet, but it needs to handle the power of my new  built 427 engine (one day 😉 !).

I’ve got some other fun winter projects coming up though . I have some incoming interior trim in red because I want my car to look like the pic below (although I’ll have my red shifter- after all that trouble I can’t give it up). 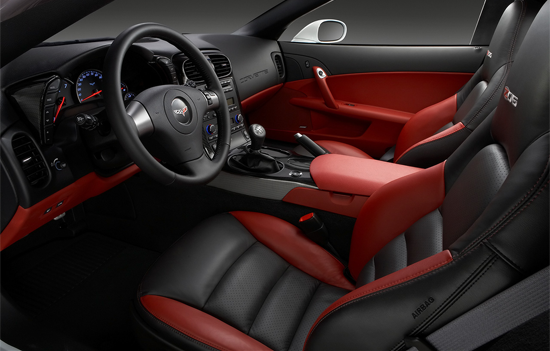 Anyway, now that work has let up a bit I hope I’ll have more time to blog.  In addition to the pain and suffering I suppose there is also a ton of fun car stuff going on this winter. Pain and pleasure thy name is Corvette.