If anyone actually reads my blog you may have noticed that I have a thing for cars. Many of you might not know this, but a few years ago I made a rule for myself: One car, one truck. I’d like to unequivocally state that this has been a fantastic rule and keeps things really simple for me (thinking of you, warehouse full ‘o cars). Right now I’ve owned my truck for over four years and my car for nearly three years- that has got to be some kind of a record for me!

Now and then I still get tempted by vehicles (new & used) but I’ve found a much cheaper and space efficient method to collect cars: behold, the 1:18 scale model. I don’t have too many at this point but my collection is growing little by little. I started it off with a Turbo S Exclusive Edition and have added a few here and there: 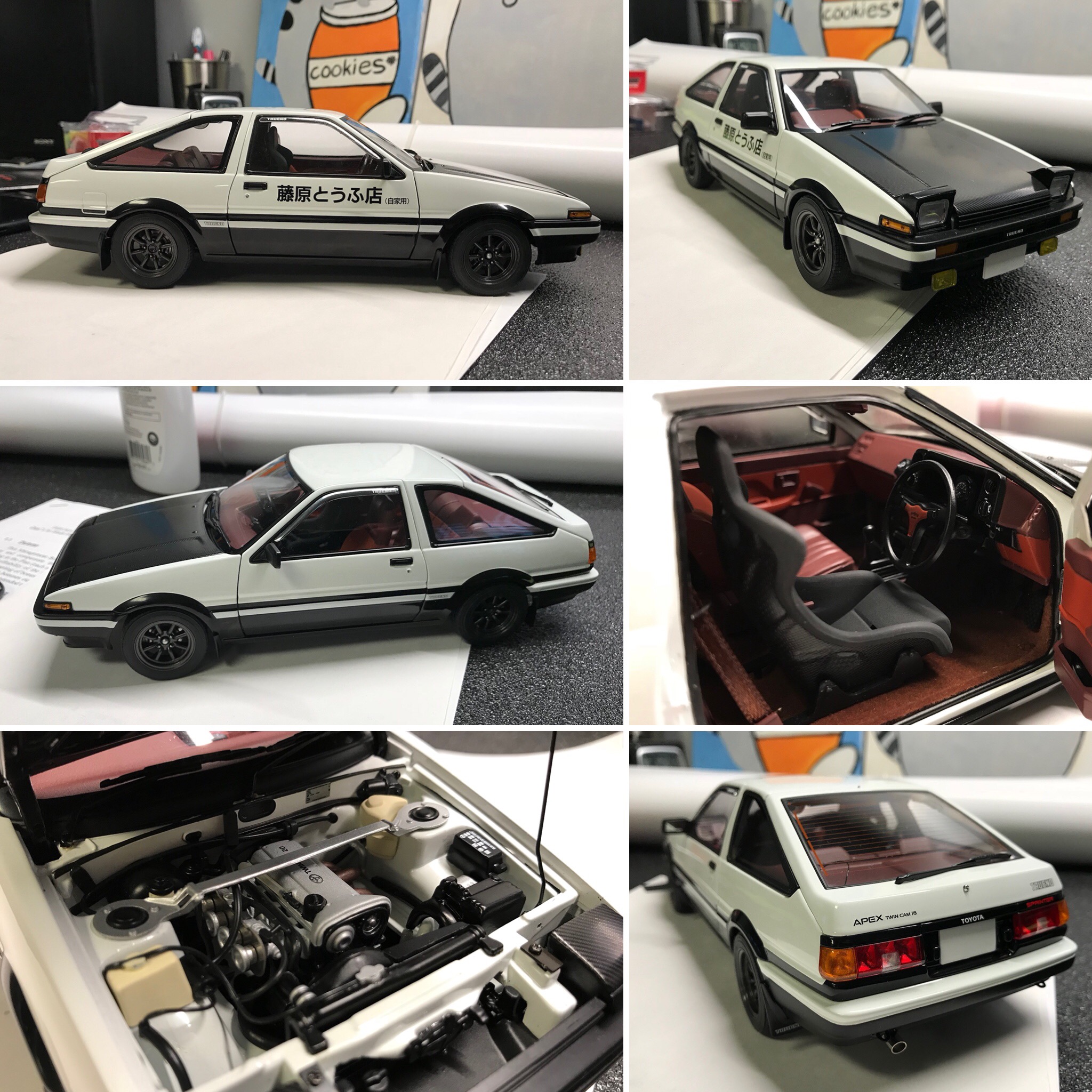 Takumi Fujiwara’s 1986 Toyota Sprinter Trueno GT Apex AE86 from the Initial D comics / TV series. I love the detail on the interior and engine bay. This is an excellent quality model. 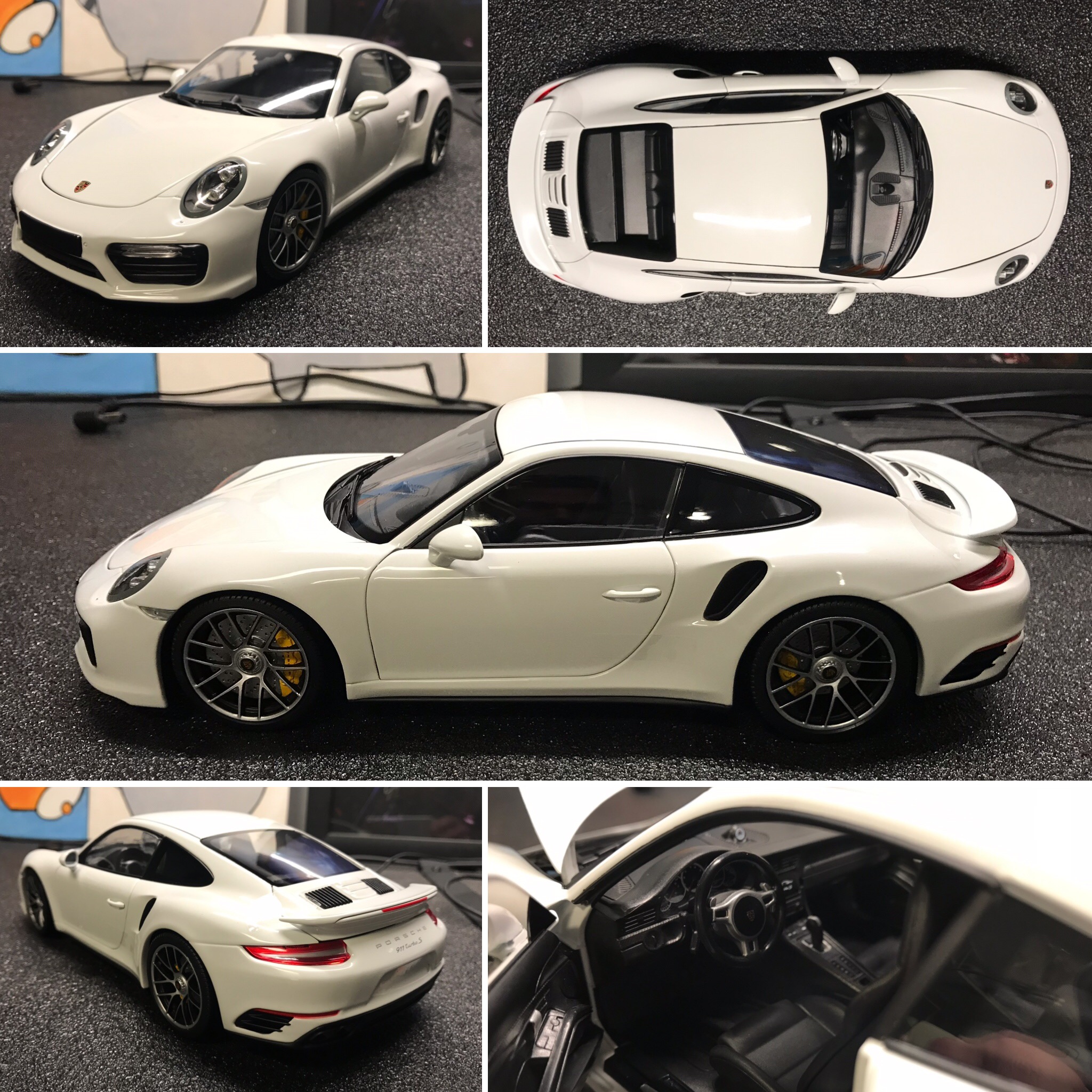 This is the Porsche 991.2 Turbo in metallic white. It’s similar to my car but it’s the newer generation (physical differences between the 991.1 and 991.2 include the engine vents and rear lights). The quality level on this one is okay but it’s a notch down from the others and a bit slower than my 2016 991.1 😀 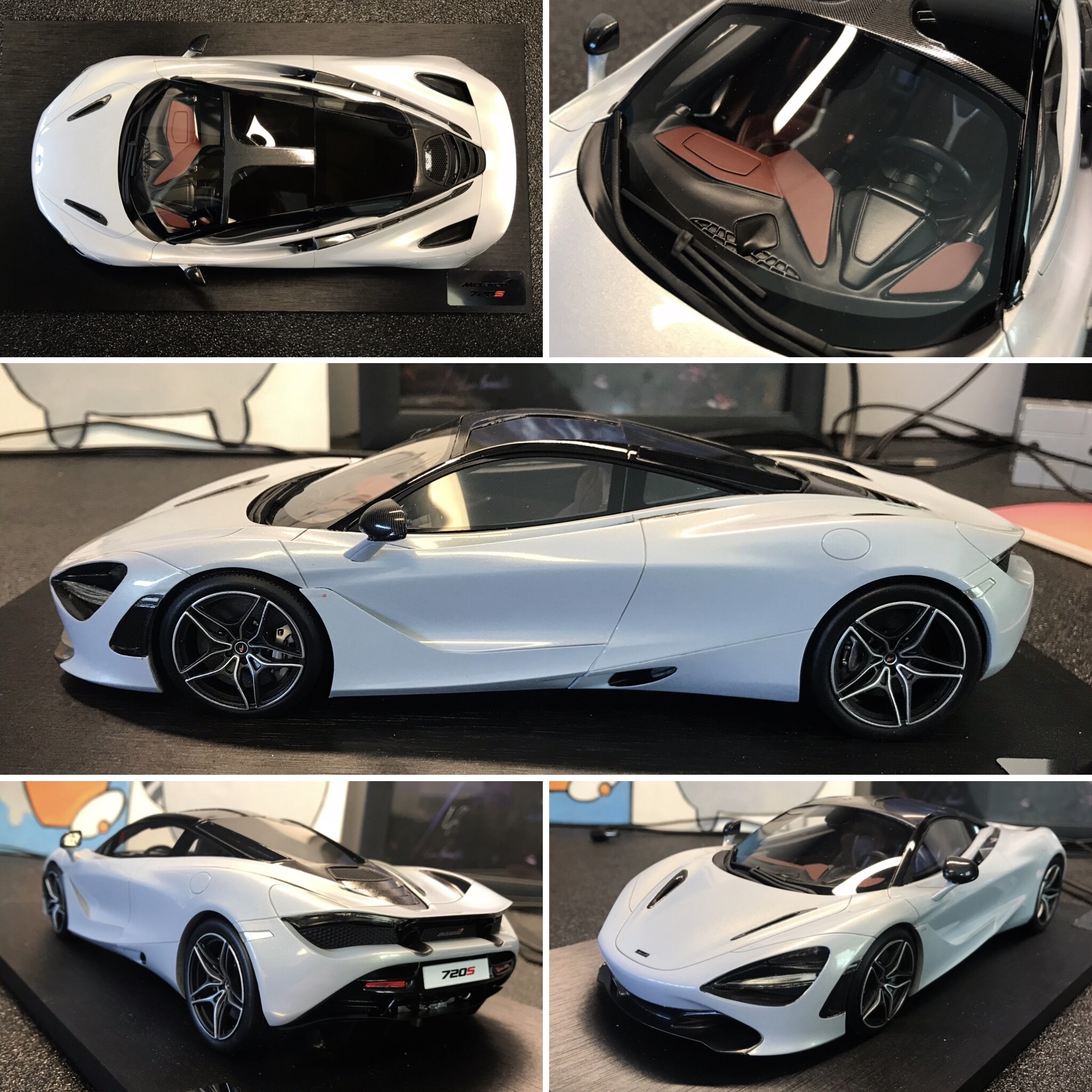 The McLaren 720s is a car I have seriously considered but, as with the 991.2, this seemed like a much more economical way to own one. The detail on the carbon fiber parts and interior is fantastic (although it’s worth mentioning the doors and rear hatch don’t open). The actual color is a light grey but it photographs more like an off-white.

As you can see from these pictures my iPhone 7 doesn’t take great photos (or you may be tempted to think I’m not a particularly good photographer… I would not necessarily argue). I may try and set the cars up and take some better shots with my DSLR eventually… but for now it’s just fun to pick up a “new car” for the price of a tank of gas. 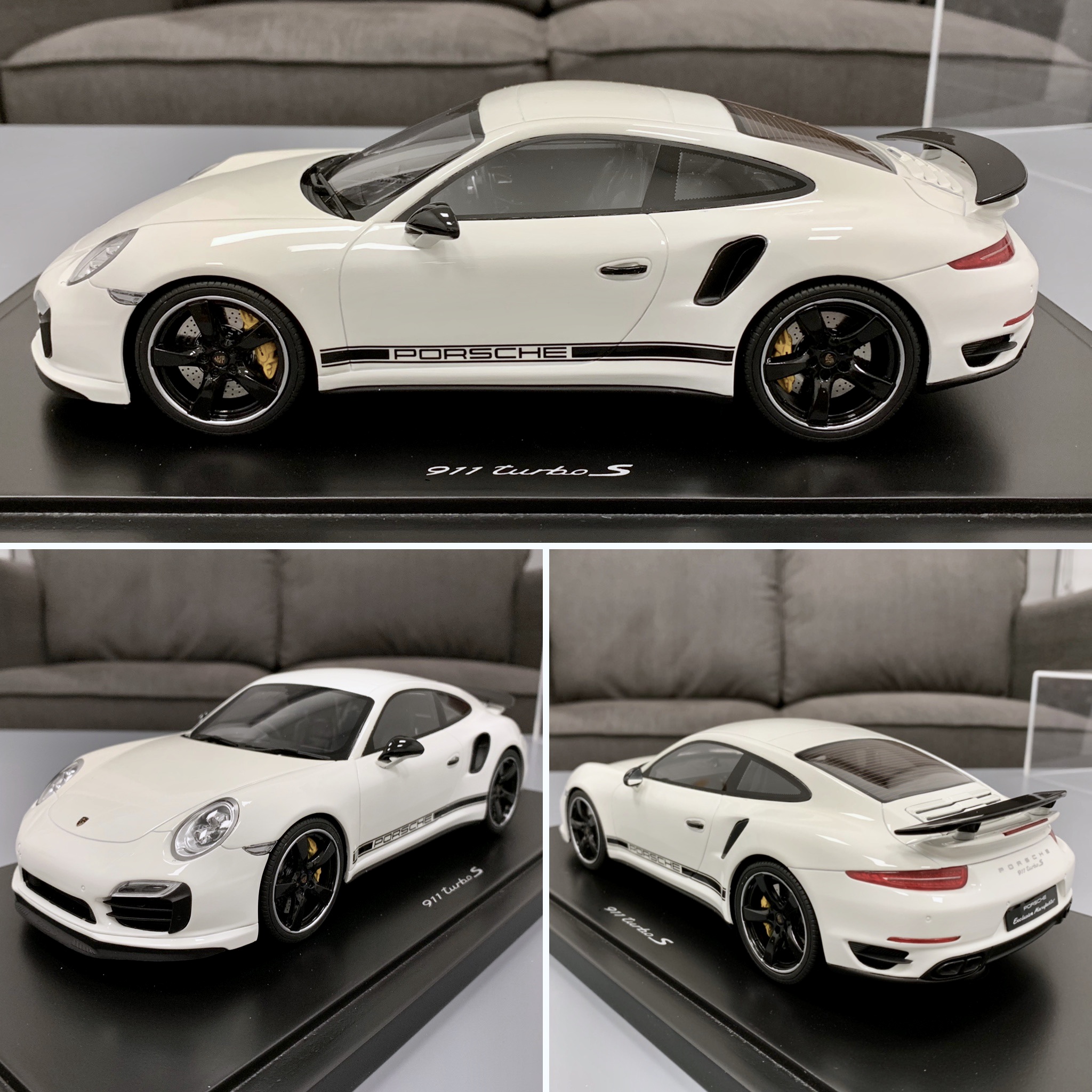 3/1/2019: Look like I lied! I found this little guy and a pulled the trigger (I’m keeping it at work since my house is already overloaded with white cars). This is a British exclusive so the steering wheel is on the right side. I couldn’t get a good shot of the interior but it’s incredibly detailed. This is a resin model (doors don’t open). Hot! 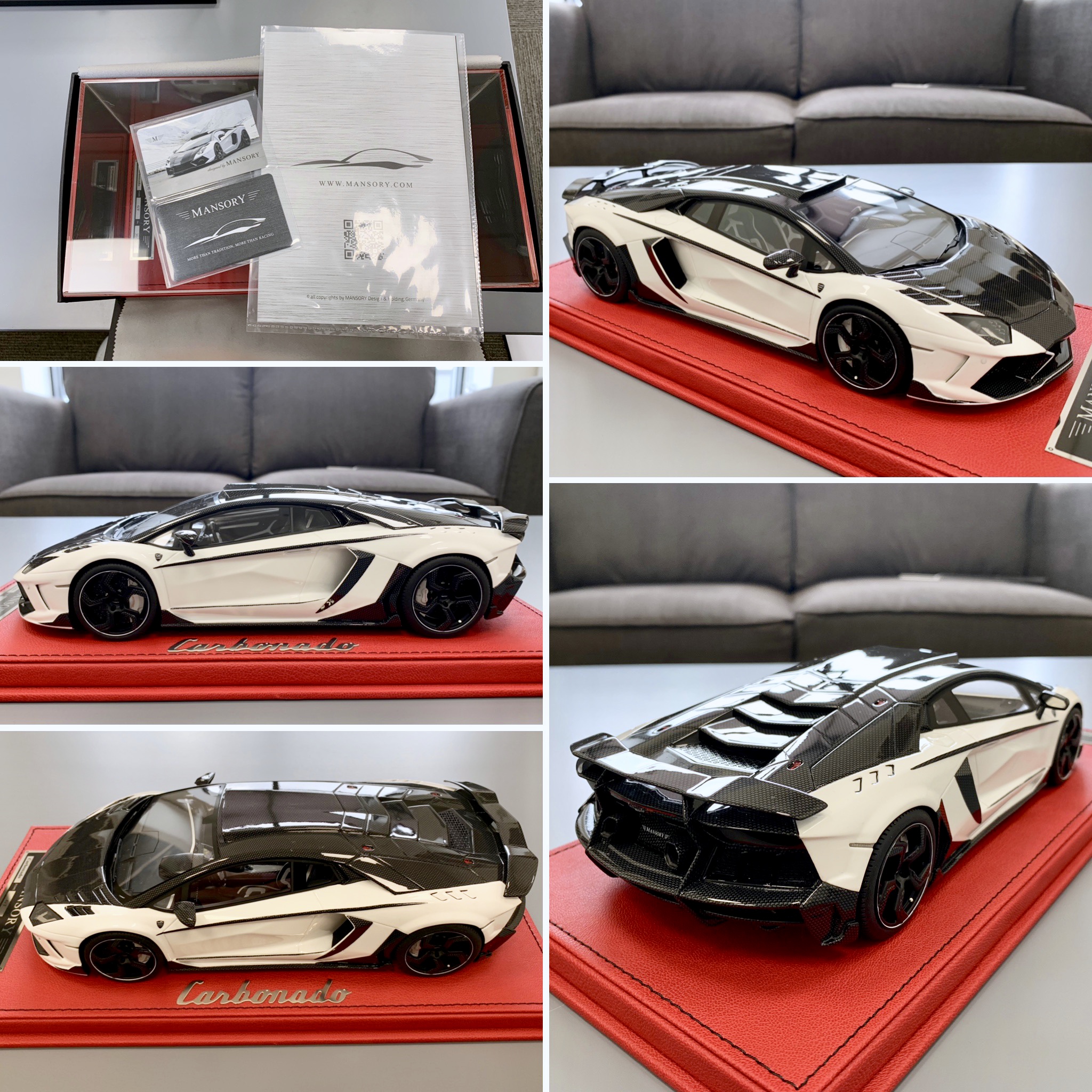 4/11/2019: Lamborghini Aventador acquired. This is the Mansory licensed “Carbanado” edition with carbon fiber additions (the model does not have real carbon fiber). I love how this one looks. 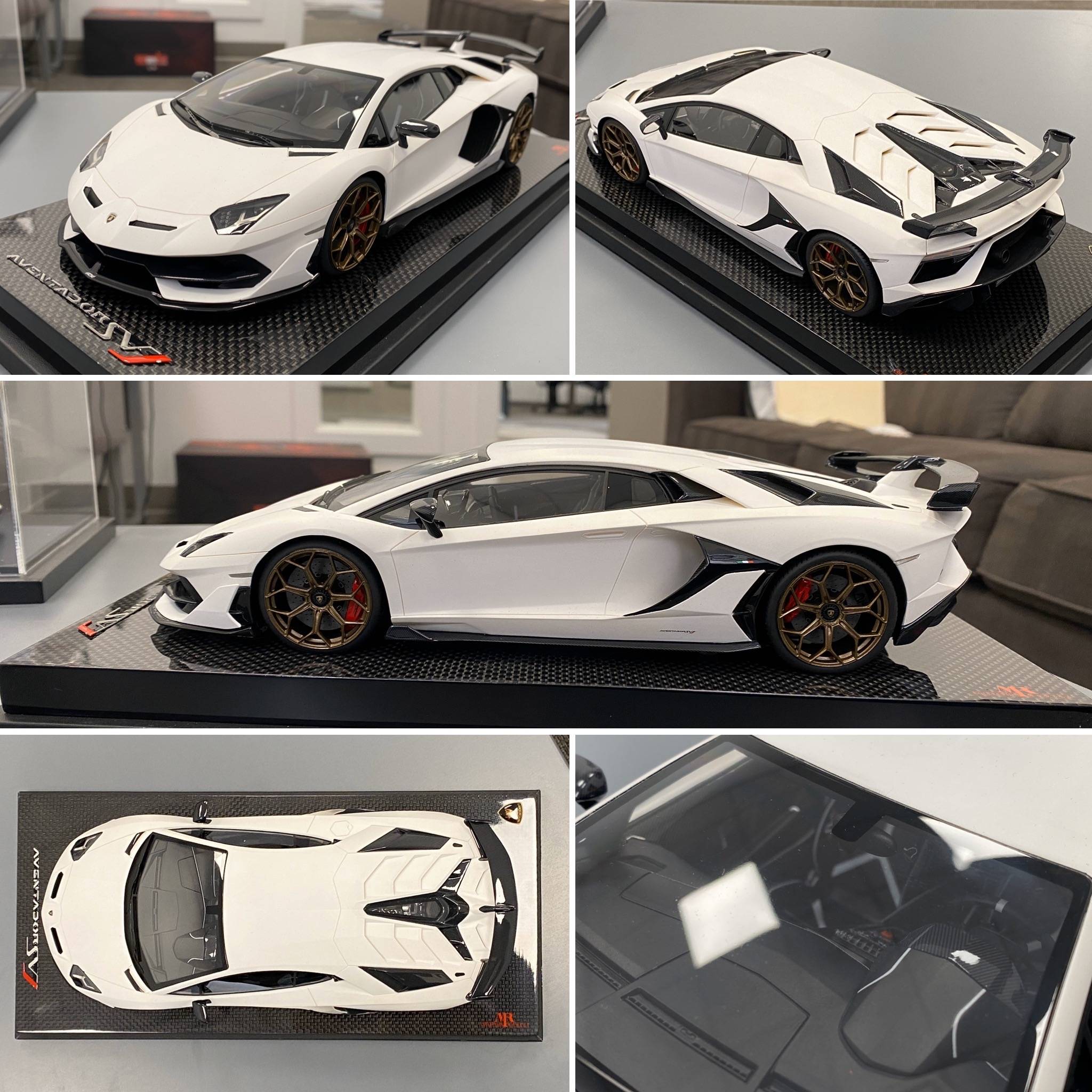 2/28/20: 1/18th scale Lamborghini Aventador. This is a one/one custom model. The body on this one is matte white- I love how it photographs. 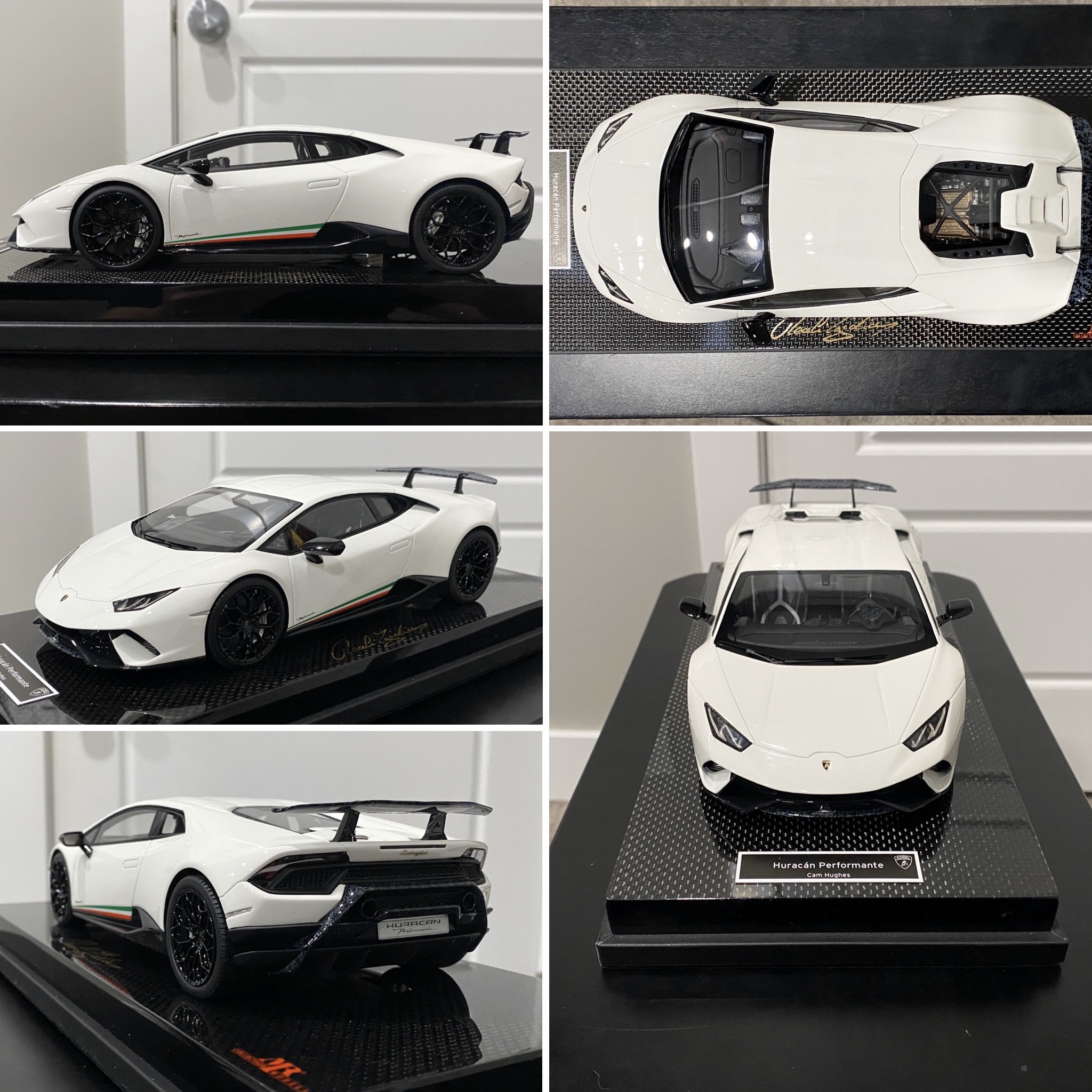 This is a cool one- a custom made replica of my Lamborghini Huracan (from Atelier). While they can’t replicate the supercharger, custom hood and other mods they did do the calipers in white. And it was cool to be able to pick the base options and get it signed by the artisan. Also added this model to my 1/18 scale collection post. 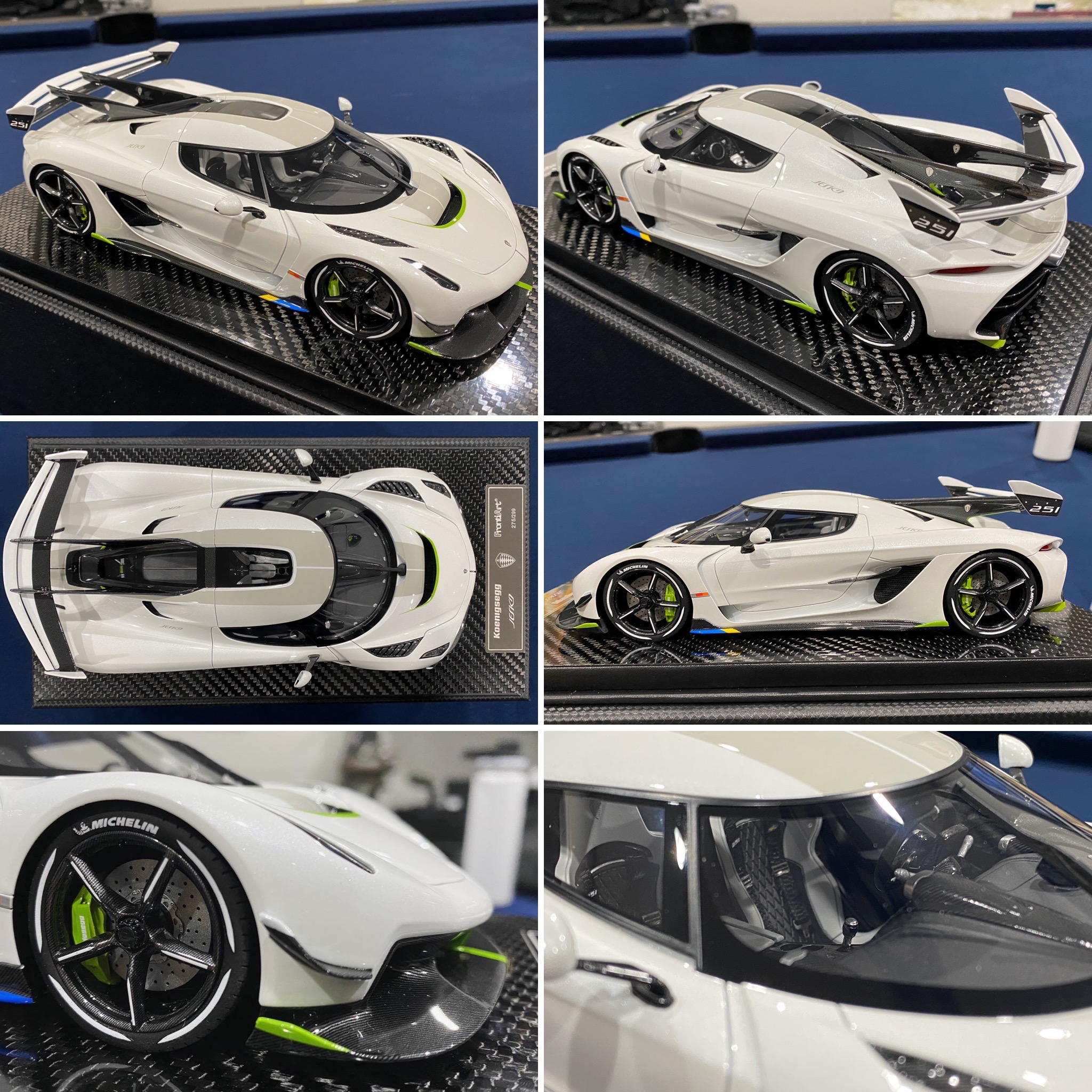 Since I’m a Koenigsegg man now I figured I’d pick up one of their cars (this time a model). This is a 1/18 scale Jesko by FrontiArt. The attention to detail is impressive and the smaller scale really lets you appreciate the vehicle’s shape. 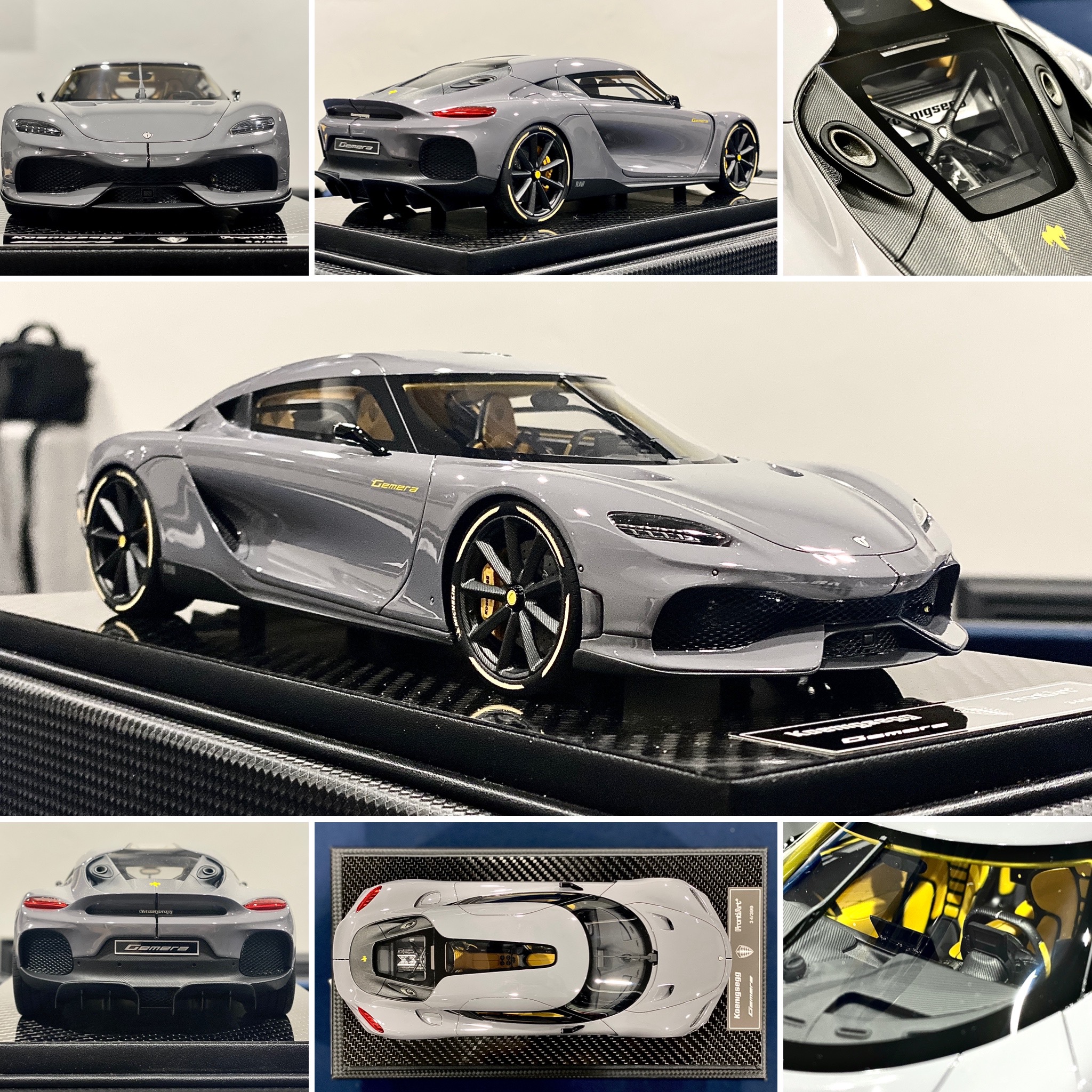 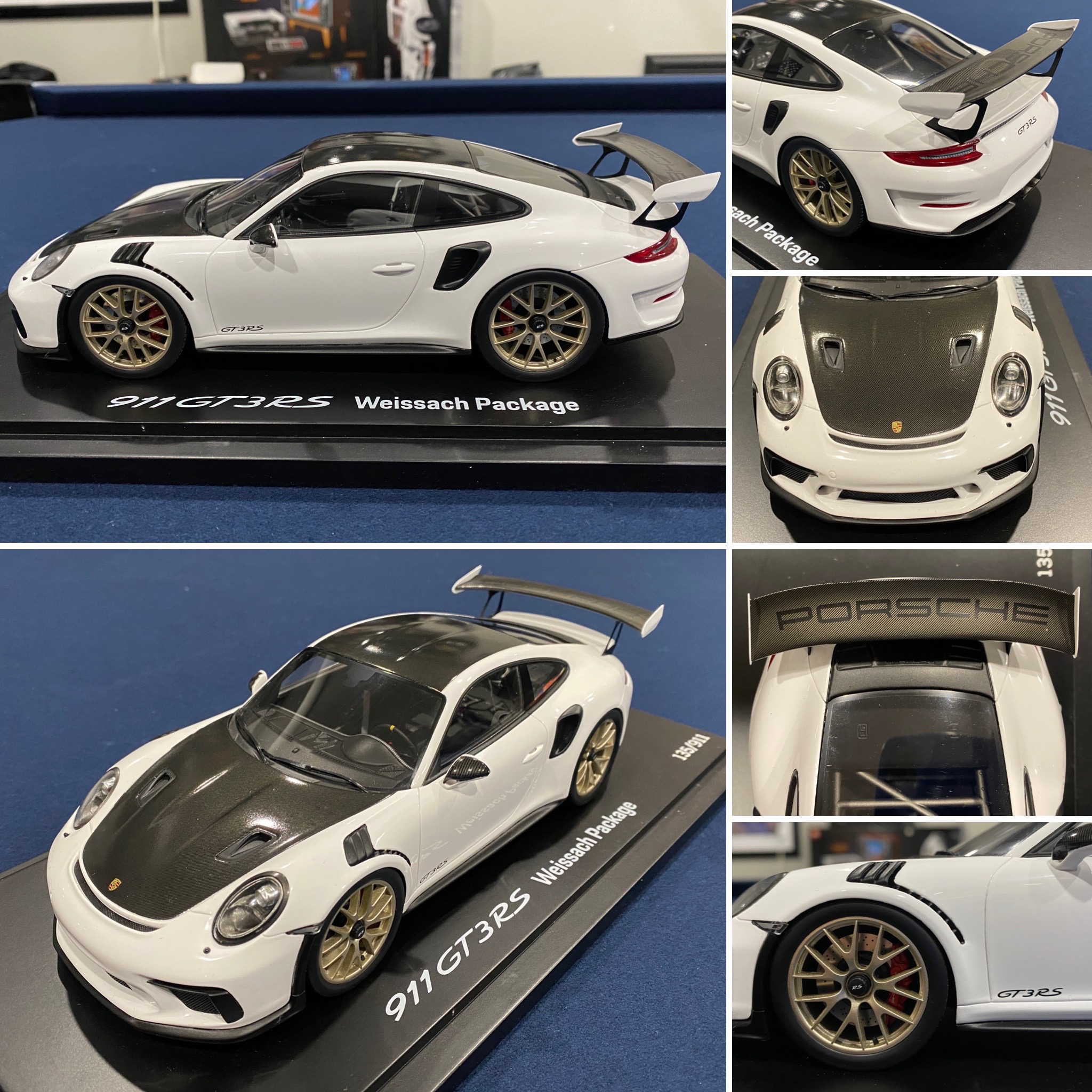 I have now been car-free for over a month. After I sold my last car I went through a kind of withdrawal. I felt like some part of me was missing and occasionally I felt like I had to get something right away to fill the void. But at the same time the past few months have been some of the most stressful in my life so not having to worry about any car-related issues was nice change. I decided I would take my time and think things over carefully before doing anything . I would even put “no car at all” on the table as an option.

In the spirit of fun I have looked at quite a few vehicles over the last month or so (Internet looking) and I’ve had people give me a lot of suggestions. Below are some of the vehicles I’ve considered or that have been recommended (some as a joke): 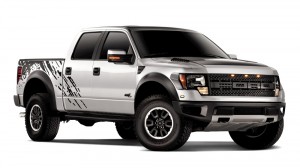 I love the Ford Raptor. If I went this direction I’d have to go with the Roush package (which includes a supercharger). Even though my local Ford dealer could install and warranty the package I’m just not comfortable pushing vehicles past their intended thresholds anymore. And at the end of the day this is a truck. A large, gas hungry, plodding truck. I am totally satisfied with my Tacoma so I don’t think there’s a Raptor in my future. 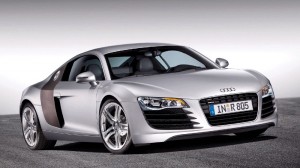 Someone suggested the Audi R8. I saw one at RaceCo and the general consensus was that they didn’t handle well, the reliability was poor and you really didn’t get a lot for your money. Not a glowing endorsement. Couple that with what is, in my opinion, a strange looking design and then R8 doesn’t make the cut. 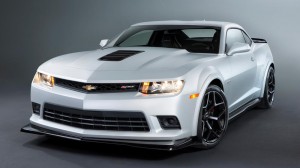 I had an SS Camaro. It was a great car in a lot of ways, but fell short in others. Visually it pushed all my buttons, but it was large, heavy and didn’t handle particularly well. And it had no headroom- none. A sunroof wasn’t even an option for me. The supercharged ZL1’s power and handling have been enchanced but I’m not sure if that’s enough to make me walk back down that path. 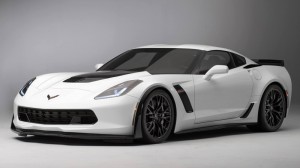 The Corvette C7 Z06 looks like it’s going to be an amazing car. It’s hard to judge a car that’s not actually available though. The 650 HP supercharged engine is appealing, but I’m leery of first year production vehicles (I know the Stingray has been out for awhile so a lot of the kinks will have been worked out). Visually this car is a miss for me in some ways, but I wouldn’t let the look necessarily stop me. 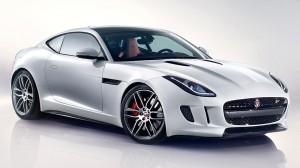 I can’t say exactly what it is, but the Jaguar F-Type just doesn’t do it for me. Despite it’s supercharged 550 HP engine it’s the slowest of all the cars listed here. Couple all that with the fact that I’m not British and the F-Type doesn’t make the cut. 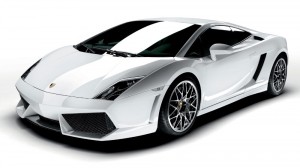 Haha… no. I think most people can appreciate the outlandish beauty of the Lamborghini Gallardo. Probably the most expensive car here and by far the most impractical. With no place to service it in Utah I can’t imagine this would be an easy car to own. And if I could find a way to afford this I’m sure it would garner a lot of unwanted attention as well. 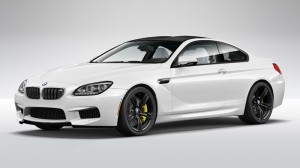 The BMW M6 certainly pushed a few of my buttons. My friend owns an M3 and it’s an amazing car. In terms of value I think the M6 would be on the top of my list- the technology they’ve put into this vehicle is second to none. 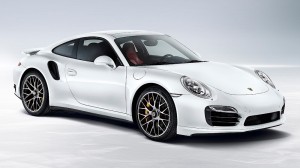 The Porsche 911 Turbo (the 911) is expensive, but there is a lot of engineering and technology in this car that have contributed toward it’s stellar reputation. In terms of 0-60 and the quarter mile the car is unmatched in its class. Add great handling, understated elegance and superior comfort to the mix and you have a winner. 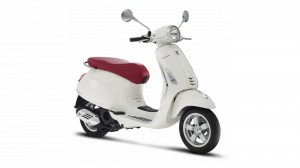 So, what’s the plan? I’m going to create an outline detailing points that explain exactly what I’m looking for (or not looking for). Then I can process potential cars through my criteria crusher and compare them to each other. Then when the times comes I can test drive the remaining cars (maybe?). Although between you and me- I think I already have a good idea of what direction I’m going to go.

I confess, I still look at cars. Well, anyone who reads this already knows that (remember the 1978 Corvette?). And why not? It’s fun, free and usually it makes me really appreciate what I’ve already got. But in March of this year I started to get serious about buying a new car (I do this about every 2-3 years).

In the course of shopping I ran into a few things I fantasized about pulling the trigger on… something like this:

I love the Lamborghini Gallardos. But deep down I’m an American muscle kind of guy and I think these Italian super cars are beautiful but overpriced (this one was a fairly good deal, but it was a 2005 model and, in my opinion, a power downgrade).

And then I decided to take the practical route- something with a back seat. Back in 2003 I had decided that one day I would own a Porsche 911 Turbo S. Seeing this gem rekindled the desire for a German 911 masterpiece. I think the red interior is stunning (although there may be a little too much red).

Again my preference for American vehicles (and my common sense) won out. Plus this model wasn’t an “S”. I was still obsessed by the idea of a backseat though. Sure I flirted with the Lambo and the Porsche but in the end I knew what I was actually going to get.

And that’s when I found this beauty:

A 2011 Chevrolet SS Camaro. All black with some yellow exterior and interior accents. Whipple supercharger (680 HP!), manual transmission, ground effects kit, like new condition. And best of all it had a backseat and it was half the price of the other two vehicles that I had considered (in other words, “realistic”). Ever since I was a kid I have dreamed of owning a Camaro (heck, my name is in there!). I was sold!

Unfortunately the car was sold too. Literally ten minutes before I made the decision to buy it someone else did. I think it was a killer deal and I’m super excited for the new owner (I actually sent multiple messages to the seller to contact me if the buyer backs out). If it was meant to be then it would have been (or will be). Here are some more pics:

I do think a Camaro is in my future (soon, even). I’ll have to keep an eye out for another amazing deal. And next time I will be like the cars I love- faster!

And for all you lucky Camaro owners our there: don’t get any ideas about being UtahCamaro (www.utahcamaro.com goes right back here). Zing!